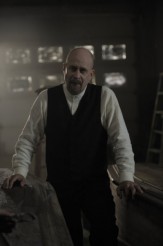 In BEING HUMAN’s episode “Going Dutch,” our three leads’ stories all take big jumps forward. For werewolf Josh (Sam Huntington), it’s panic time when girlfriend Nora (Kristen Hager) tells him she’s pregnant – not because he doesn’t want commitment, but because he’s afraid he’s passing along his wolf genes (which he still hasn’t told Nora about).

Ghost Sally (Meaghan Rath) has an unpleasant afternoon when her killer/ex-fiance Danny (Gianpaolo Venuta) and his new girlfriend Bridget (Angela Galuppo), who used to be Sally’s best friend, bring over an exorcist. This starts to have a terrible effect on Sally, but backfires on Danny when Sally is able to show the exorcist a flashback of the murder – Danny doesn’t help his case by mistakenly attacking the exorcist.

Meanwhile, the Boston vampire world seems like it may be in for a major shake-up, what with elder Dutch vampire Hegemon (Terry Kinney) expressing his disapproval of Bishop (Mark Pellegrino). Hegemon demands that Bishop kill off two-thirds of his vampire flock and then submit to being buried for at least fifty years.

Aidan (Sam Witwer) and Bishop’s other protégé Marcus (Vincent Leclerc) try to rescue Bishop by proposing a less drastic penance, but Bishop has his own defiant plot in mind. After telling the Dutch contingent that he has no intention of surrendering, Bishop reveals that he has slipped Hegemon and his entourage a drug (via the blood of their previous evening’s victims) that causes them to be woozy.

Bishop beheads all of the Dutch except Hegemon, who is rescued by Aidan, who fears the consequences of Hegemon’s death. Marcus attempts to stake Aidan in the chaos, but instead, Marcus is staked by Aidan’s lover Rebecca (Sarah Allen). Rebecca then begs Aidan to stake her, before she is killed by Bishop in retaliation for Marcus’ death. Besides, she cannot bear the vampire existence any longer. Aidan wants to die with her, but Rebecca dissuades him – someone has to stand up to Bishop. Aidan, tearfully and reluctantly, finally obliges Rebecca.

All of the above makes for a very eventful episode. Josh’s fumbling of Nora’s big news is typical of the character, but the more we see of him, the more Huntington shows us that Josh is acting from an enormous desire (and powerlessness) to do the right thing, rather than just neurosis. It helps of course that he does come around in record time (at least, for Josh) to telling Nora his basic concern – that he had genetic reasons for believing himself to be sterile – if not the hairy details.

Sally’s storyline parallels its U.K. ancestor to an extent, but it plays as suitably creepy and weird, and may pave the way for other interesting events. Pellegrino and Witwer play off one another so well that watching their scenes together is always entertaining, and a three-way schism in vampire politics has plenty of story promise,

The matter-of-fact handling of the vampires’ attitudes towards humans – Bishop offering Hegemon and Co. a pregnant woman, for example – is handled intelligently and Leclerc earns a bit of sympathy for the largely unlikable Marcus in revealing the character’s back story.

“Going Dutch” is a good episode, filled with incident and engaging to watch.

Do you love the new BEING HUMAN or hate it? COMMENT below at let the debate rage on