Two hours to do something that could have taken a half hour .. . yet at least we have the semi-finalists

Holy crap if I have to hear J.Lo say “I can’t do this anymore” on AMERICAN IDOL one more time, I’m seriously going to punch someone.

How many times must we see the same clip over and over again? They showed it like 20 times on Wednesday leading up to the actual moment and then for the previews for this episode.  Then we see it again for what seemed to be a dozen times in the beginning.

We get it. She’s all full of heart and cares about these people, but do you have to ram it down our throats that she does? It’s terrible editing. I know they want to build the drama and having her “break down” is a big thing, but Jesus, give the viewers a break on their level of maturity and ability to know it the first time or the second time.

And I mentioned it on my review of Wednesday night, but do we really need four hours this week? This whole process that they showed tonight could have easily been truncated into one hour. We didn’t really get to see many of the performances in their entirety and they spent more time building the drama about whether these people would make it or not. We don’t need that much time spent now. We need to really to just get to the point where the viewers get involved, we’ve spent enough time with the path to that moment.

I guess the one saving grace is that the ones that made it were all shown singing their final song so that’s good, but it did take a bit of the surprise out of it and the constant, “Oh there are only 24 spots” thing got annoying because WE KNOW THERE ONLY 24 SPOTS! Stop telling us. Just get to it.

So unlike IDOL, I’m just gonna get to it and tell you who made it.

The five that made it last night include: Naima Adedapo, Haley Reinhart, Ashton Jones, Clint Jun Gamboa and Paul McDonald.

Those that made it to the next round include:

Now, I guess I am confused. I thought I read that they were not going to let people vote for the Top-24, but Seacrest kept saying it over and over that America would be choosing who will move on. So I guess that whole bypassing the Top-24 vote was not true or maybe the public will vote to keep only 12, which might be a good thing actually.

Luckily, next week the live performances begin and that’s when this show really gets going and as I said before, we’ll see how these new judges do – which will be just as interesting as the contestants. 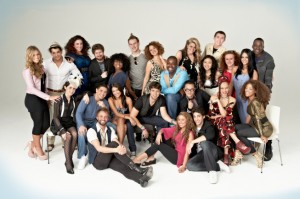