Home » Breaking News (update): Wow! TWO AND A HALF MEN shut down for the rest of the season. Sorry Charlie! 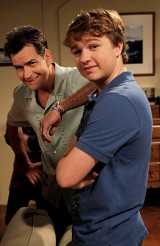 Breaking News (update): Wow! TWO AND A HALF MEN shut down for the rest of the season. Sorry Charlie!

﻿﻿﻿﻿After several weeks of Charlie Sheen’s increased confrontational behavior (especially his call-ins to radio shows), CBS and Warner Television finally made a decision about the status of TWO AND A HALF MEN and the rest of the season.

Here’s what they said in a just released statement …

“Based on the totality of Charlie Sheen’s statements, conduct and condition, CBS and Warner Bros. Television have decided to discontinue production of TWO AND A HALF MEN for the remainder of the season”

Originally there was supposed to be four episodes, now none. This does not bode well for a ninth season, at least a ninth season with Sheen.

After CBS and Warner’s fired their parting shot, the unpredictable Sheen sent an open letter to, of all places, TMZ. This is the second time he’s taken potshots at TWO AND A HALF MEN creator Chuck Lorre today.

Here’s what Sheen’s response to the plug being pulled.  [Note, Haim Levine is how he refers to Lorre].

“What does this say about Haim Levine after he tried to use his words to judge and attempt to degrade me. I gracefully ignored this folly for 177 shows … I fire back once and this contaminated little maggot can’t handle my power and can’t handle the truth. I wish him nothing but pain in his silly travels especially if they wind up in my octagon. Clearly I have defeated this earthworm with my words — imagine what I would have done with my fire breathing fists. I urge all my beautiful and loyal fans who embraced this show for almost a decade to walk with me side-by-side as we march up the steps of justice to right this unconscionable wrong. Remember these are my people … not yours…we will continue on together… Charlie Sheen”

You’d think this would be it, but, strangely (sadly), I don’t think this thing is over yet. Stay tuned.