Summer Glau guest stars in an episode that features a lot of welcome character ambiguity, plus a credible crisis subplot for Gary 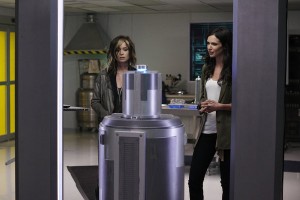 Nothing is very straightforward for the ALPHAS gang for long. “Catch and Release” presents everybody with a set of moral dilemmas, with the various characters landing in different places along the spectrum. As a bonus, Summer Glau guest stars as an Alpha (though the writing/casting veers away from the obvious kick-ass possibilities).

Skylar Adams (Summer Glau) is an electronics genius – think MacGyver on mental steroids. Rosen (David Strathairn) and Nina (Laura Mennell) know Skylar from way back when, but when she declined to join the group, she was allowed to go her own way. Now, however, she is being pursued by a bunch of men with guns. Rosen and the team intercept Skylar and bring her back to headquarters. It turns out that there are two sets of armed pursuers – both from different branches of the U.S.government. Rosen’s handler Sullivan (Valerie Cruz) demands that Rosen turn them over to Nathan Clay (Mahershalalhashbaz Ali), and Rosen is reluctantly willing to comply. Skylar uses her skills to almost instantaneously create a device that zaps everybody so she can escape. When she turns up at Nina’s house, Nina – always wary of the Alphas’ government ties anyway – throws in with Skylar and the two women drive off together. They make a stop so that Skylar can kill “Bob,” a computer tracking system she created for the government that makes it possible for them to track her.

Meanwhile, Gary (Ryan Cartwright) is at home, because his well-meaning mother Sandra (Jane Moffat) has told Rosen that Gary is sick and has told Gary that Rosen doesn’t need him today. She wants Gary to quit the Alphas and take a nice safe job with his uncle Alan.Gary finally goes off on his own, tracking Nina and Skylar to a gas station (racking up over $800 in cab fare on the way). Rosen and the rest of the team show up – Skylar zaps everybody with another handmade device and heads out on her own in a stolen car. She is in contact with a mysterious Z, and Sullivan et al fear these communications signal that Skylar is working with terrorists. However, Rachel (Azita Ghanizata) is able to track Skylar by smelling the oil being leaked by the car Skylar stole. They find Skylar at a remote farmhouse owned by Skylar’s uncle. In the house is a little girl, under age five, Zoe, who is cheerfully writing complex mathematical formulas with her crayons. This is Skylar’s daughter, even more of a math genius than her mom. Skylar knows that if the government gets its collective hands on Zoe, they’ll turn her into a lab rat. Rosen agrees and helps Skylar and Zoe flee, flat-out lying to Sullivan and Clay. Later, Rosen and Nina meet up with Skylar, who gives them the tracking system. Rosen smashes it.Gary declares to his mother that he is grown up enough to decide what he wants to do. He says he is happy as a secret agent, and his mother finally accepts this. Bill (Malik Yoba) who has been on the fence about trying to make a baby with his wife – he’s been afraid of passing on the Alpha gene – is persuaded after seeing Zoe that this wouldn’t be the worst thing in the world.

The casting of Glau as Skylar works splendidly. It should surprise no one that Glau is terrific playing a character who is harder and more worldly than others she is known for; she and Mennell have a delightful scene where Skylar and Nina reminisce about their wild shared past. There’s also a great moment when Skylar detects Nina trying to “push” her and reveals her just-whipped-up protective contact lenses.

The episode also allows Strathairn to occupy the articulate bureaucrat with a soul persona that he makes so entirely human and watchable whenever Rosen gets stuck between what is safe, what is legally required and what is humane – which on ALPHAS are often three contradictory things. There are bonus points for employing Rachel’s sense of smell in a novel way.

The temporary removal of Gary from the group accomplishes several things. First, it shows us that the Alpha squad are smart enough to improvise when they lose their main method of communication/surveillance. Second, it gives us the very understandable drama of Gary’s home life, with his mother trying to balance letting her son have a life with making sure that he exists long enough to enjoy it. Cartwright handles Gary’s forceful style with nuance and Moffat puts an empathetic spin on Sandra’s dilemma.

The notion of an Alpha as young as Zoe, with an Alpha parent no less, has enormous potential that, sadly, the show may never get a chance to explore. Having it impact Bill in the way that it does is a nice touch, though.

“Catch and Release” is a fine episode that shows ALPHAS’ premise and emotional/intellectual craft to strong advantage.