Interview: DON’T BE AFRAID OF THE DARK star Guy Pearce sees the light 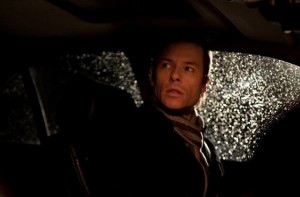 In the new horror film DON’T BE AFRAID OF THE DARK, produced and co-written by Guillermo del Toro (with Matthew Robbins) and directed by Troy Nixey, Guy Pearce plays a father whose young daughter (Bailee Madison) is sent to live with him and his new girlfriend (Katie Holmes) in his creepy old house infected by little creatures living in the walls.

The film is actually a remake of a classic made-for-TV movie penned by Nigel McKeand – a now classic film that many (including Del Toro) remember fondly for all the nightmares it provided. However, Pearce admits he “knew it existed, but hadn’t seen it.”

“Troy talked to me about whether I wanted to see it and I said I didn’t need to,” says Pearce. “It was clear we were doing something very, very different and I felt I didn’t want to go down that road. I’m curious now that’s I’ve finished the film.”

For Pearce, stepping into the horror genre wasn’t nearly as frightening as working with the young Madison.

“I was intimidated by her,” Pearce says with a laugh. “Katie and I were like, ‘we better get our s**t together – she’s a little smarty pants and really bright.’ Whenever we read through a scene, she knew everyone’s dialogue off the top of her head.”

Pearce was also impressed with how Bailey handled the emotional part of the role – something he says impresses him about young American actresses.

“She is so mature and she seriously took it on,” says Pearce. “You’ll see in the movie how much screaming and crying [she does]. She was really quite phenomenal to go there. American kids are like that – they are amazing that they have such a grasp on their emotional state. In Australia [where Pearce is from], kids are seen not heard. It’s embarrassing if kids speak, but in America, there’s a pride about your voice and there’s definitely a big difference. Any kid who wants to be an actor in America has this command.”

Although Pearce has largely stayed away from appearing in horror films (he did star in the cannibal film RAVENOUS which he views as a “funny” horror film), he does have found memories of seeing horror movie double features while growing up.

“I vividly remember seeing a double feature of DEATH SHIP and AMERICAN WEREWOLF IN LONDON,” recalls Pearce. “Those both stuck in my head as well as HALLOWEEN, FRIDAY THE 13th and EVIL DEAD. Then I lost interest. As an audience member and as an actor it doesn’t hold me. Funny enough, doing this film was much more about the psychological drama of this father whose daughter is thrust upon him. I knew it was a horror film, but intellectually I say it as drama, so it was really interesting doing this. And the relationship I have with Katie is new. So the idea of a kid being thrust into this new relationship creates a very different dynamic and to me, so I viewed it as a very interesting domestic drama.”

With DON’T BE AFRAID OF THE DARK complete, Pearce says he wants to continue down the acting path he’s established by continually taking on unpredictable roles.

“I’m always, selfishly, seeking out a different things to do,” says Pearce. “I don’t want to be typecast in roles – there’s something deathly [terrifying] about that to me.”