Home » TCA 2011: Fox talks about the greenlight of COSMOS: A SPACE-TIME ODYSSEY 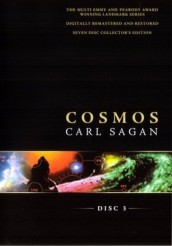 TCA 2011: Fox talks about the greenlight of COSMOS: A SPACE-TIME ODYSSEY

The last thing anyone would expect the Fox network to do would be a documentary sequel to the hit 1980s PBS/Carl Sagan hosted and produced documentary science series COSMOS, but it’s official – they’ve greenlit it.

“It’s a unique property that doesn’t feel like a natural fit on Fox, but it was the most successful thing PBS has done,” explains Reilly. “I hear more people coming up saying they loved the show. It has an ancillary benefit, because you have a whole generation saying the original show made them want to study science. In this day and age, that would be a nice benefit. It’s also an enduring brand and we like the challenge of it. We have real estate on our schedule and in partnering with our sister network NatGeo, we have a lot of resources to get it out there. Will it be our biggest ratings – probably not, but I think we can have a big success with it. And it’s a cool thing to be part of it and hopefully have the same cultural impact the original did.”