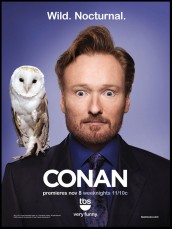 With his CONAN show a huge success for TBS, the talk show host reflects on the last year

While Conan O’Brien’s new TBS talk show CONAN has continued to impress in the ratings, while speaking to the press at yesterday’s TCA press tour, he reflected back on the whole Jay Leno/NBC situation in what should hopefully be the final word on the subject.

In terms of Jay Leno (who we all know retired from THE TONIGHT SHOW, didn’t leave NBC and started a 10:00 pm talk show, that was canceled and then was responsible for Conan leaving THE TONIGHT SHOW and Jay taking over again), O’Brien says he doesn’t think much about it and has no interest in talking with Jay about what happened.

“Jay, no, I don’t think so,” says O’Brien. “There’s nothing to figure out . We all know what happened. Life is too short. I have kids and family and a life to live and I’m really happy here so I don’t think about it. And I’m sure he’s busy.”

In terms of what he misses, he says it was being part of the NBC family after so many years.

“I think what I miss the most is that I was with that company for a long time and felt a part of that family,” says O’Brien. “That means a lot to me to have been part of NBC. It’s like when they take off a limb and you still feel you have a limb. There’s a whole body of work I’m proud of.”

And he admits working with TBS has been fantastic and creatively liberating.

“We’re partnered with people who have encouraged us from Day One,” says O’Brien who admits he’s “not interested in being on TV forever, though he also counters that nothing beats it. “There’s nothing like walking away from THE TONIGHT SHOW to appreciate being on the air.”