Home » TCA 2011: Syfy’s BEING HUMAN vs. the BBC version? The producers weigh in on the differences 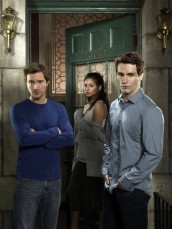 TCA 2011: Syfy’s BEING HUMAN vs. the BBC version? The producers weigh in on the differences

The big difference - the first season American episode run is 13 vs. BBC's six

With the American remake of the recent BBC series BEING HUMAN set to debut on Syfy on January 17, the cast and executive producers appeared today at the Winter 2011 TCA’s to talk about the similarities and differences between the two incarnations of the show.

The basic premise remains: vampire Aidan (Sam Witwer), werewolf Josh (Sam Huntington) and ghost Sally (Meaghan Rath) all share a loft together and try to get to the bottom of what it’s like to “being human.”

“I would say if you’re a fan of the original, you’re going to see a show that starts much the same way as the British version,” says executive producer Jeremy Carver. “We’re never shy in saying, ‘this is a wonderful premise we were handed.’ You see in early episodes that we follow a similar trajectory, while we’re laying in larger elements of a story that will be unique to our version. As a fan of the BBC version, we took delight in having a longer period of time where we could confront some of these same moments and situations and we said to ourselves and writers said to us – ‘what if we did this differently?’ I think you’re going to see a lot of moments where you think you recognize things from the original, but it’s handled in a completely different way. It was an enormous amount of fun to be able to twist things like that.”

In terms of the differences, executive producer Anna Fricke adds, “they had six [episodes], we have 13, so we felt free to break out and tell different stories.”

While the executive producers did watch the first season of the series, they explain they made a point of not watching the second season.

“We didn’t want to be influenced by it while we were arcing out our own [first] season,” says Fricke.

Actor Witwer also is quick to note that he and his fellow actors didn’t want to take anything away from the BBC actors and series.

“These roles in the original series are being played beautifully by those actors,” says Witwer. “But we want to do our own thing and that’s what’s fun for us”