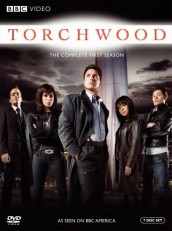 According to executive producer and creator Russell T Davies, the new title will be TORCHWOOD: MIRACLE DAY and reveals what the premise will be in Season Four.

“The premise is a miracle that happens on earth,” says Davies. “Not a single person on earth, no one dies. The old stay old. No one keeps dying. It’s great news for some people and globally, it’s an instant overnight population boom. The earth relies on people dying. Suddenly you’re affecting everyone on the planet. That’s where our Torchwood team comes in.”

Since this series is a Starz/BBC co-production, and it will be filming in the U.S. , Davies says “in many ways, this is a new start for TORCHWOOD.”

That said, Captain Jack (John Barrowman) is the full lead of the show.

“Captain Jack is an immortal and what happens, the world turns immortal and so there’s a lot of story packed into that,” says Davies.

This being a DOCTOR WHO spin-off, Davies says it won’t ignore that history to appeal to U.S. audiences, though there will be less of it.

“TORCHWOOD began life as a spin-off of DOCTOR WHO,” he says. “and we honor that history of DOCTOR WHO and there are fewer references quite honestly because it’s difficult to coordinate a crossover, since we’re shooting [in the U.S.].”

Davies also notes that the structure of the fourth season will be more like the CHILDREN OF EARTH mini-series and less the monster-of-the-week that highlighted the first two seasons of TORCHWOOD.

“[In the first two seasons TORCHWOOD] was in DOCTOR WHO’s shadows, and when we got to do CHILDREN OF EARTH, we could tell one story,” says Davies. “It has a beginning, middle and end like this will and it’s a massive shattering climax. It’s got that shape to it now. I can’t wait for you to see it. There are some shocking episodes to come. Some shocking visuals and shocking things about people. It feels exciting and it feels new.”

As for the new characters, Mekhi Phifer will play Rex Matheson, a CIA agent.

“I’m trying to figure out what Torchwood is, what’s happening and why humans are being targeted,” says Phifer. “As he goes on this whole investigative tirade, he’s kind of a cocky, arrogant guy and a little full of himself at points. When it all hits the fan, he’s very dedicated and focused and wants to find out what the hell is going on.”

“I play a convicted murderer and a pedophile and I’m put through lethal injections to be executed and I live,” says Pullman. “That’s the beginning.”