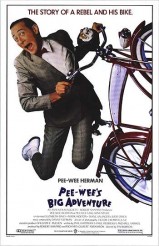 While promoting his forthcoming HBO special of his Broadway show THE PEE-WEE HERMAN SHOW ON BROADWAY at today’s Winter TCA session for HBO, Paul Reubans, aka Pee-wee Herman, revealed some information about the new Pee-Wee Herman movie that he’s writing.

“Judd Apatow is producing and I’ve been working with a writer named Paul Rust and we just turned in the first act during the first week of Christmas,” says Pee-wee, who says writing will commence on the script once they’re done with the special.

He admits it’s a more traditional story and not a “dark” movie as had previously been hinted at.

“The movie is more traditional,” says Pee-wee. “Judd wanted to do a reality-based film like [PEE-WEE’S] BIG ADVENTURE. This is a road picture that we’re writing now.”

Pee-wee admits that the movie is still shaping up now.

“I’ve been greatly influenced by Russ Meyer’s film FASTER PUSSYCAT, KILL KILL KILL,” says Pee-wee, who sounds like he’s being serious and not ironic. “I think there will be some biker chicks that will come in and aid in going cross-country. Not sure yet, but I think.”

As to whether or not Apatow would direct, Pee-wee says that’s yet to be decided.

“He has not decided,” says Pee-wee. I think he’s waiting to read the script and then decide.”

As for the HBO special of the stage show, Pee-wee says it will look like nothing anyone has ever seen from a special taken from a Broadway show.

“We shot one live performance,” says Pee-wee. “We also shot the show without an audience and pulled the cameras on the stage. You’re going to see angles in a live performance of a show, that you’ve never seen before. It’s usually shot from the back of the house. We’re going to be able to intercut days worth of footage, where cameras are up on stage, panning and moving. I think it’s going to be staggering. It’s visually going to look like nothing anyone has seen before.”