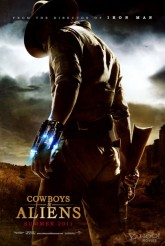 Release Date: Summer
Stars: Daniel Craig, Harrison Ford
What Is it? An adaptation of a little known comic book directed by IRON MAN’s Jon Favreau about cowboys battling aliens.
Want To See Factor: Okay, now this is more like it. Are we excited yet? Yes. There’s Craig and Ford looking bad ass and the great juxtaposition of cowboys on horses going mano y mano with alien spacecraft. If BATTLE: LOS ANGELES looks like more of the same, this looks like nothing we’ve ever quite seen before. This is the kind of trailer you need to stand out during the Super Bowl.
Super Bowl Points: Bad-ass action and a commercial that actually promotes its big name stars. Cool spaceship action and of course Craig jumping off a horse onto a flying spaceship.
Grade: A-