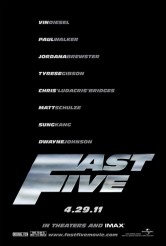 With Super Bowl Sunday here, ASSIGNMENT X has decided to review the movie trailer commercials in between the game to see how well the studios are using the mega-dollars they’re spending to draw people into theaters.

What Is It: The fifth sequel in THE FAST AND THE FURIOUS franchise

Want To See Factor: The action looks good, but it’s the fifth movie, so it’s more of the same.