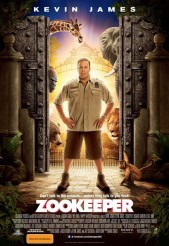 There have been bigger messes than ZOOKEEPER, which is one of the few nice things that can be said about this umpteenth talking animal movie.

That said, one of the biggest problem with the film is that  it’s a film clearly geared toward children but it has no idea of how to connect to that audience, especially with its reliance on overly adult themes to tell its story. I guess with five credited screenwriters, that’s probably where part of the problem started.

The story follows Kevin James as Griffin Keyes, an excellent zookeeper who knows how to handle and treat his animals with respect, but has a harder time dealing with actual people. He was dumped by his soulless and materialistic girlfriend Stephanie (Leslie Bibb) after he proposed to her, quite romantically, on a beach.

Still reeling from that five years later, Stephanie comes back into his life, and he thinks he has a shot again, so the animals reveal to Griffin that they can actually talk and start coaching him in the art of winning back his love.

However, Griffin starts losing himself and becoming someone he doesn’t want to be – all the while missing out on the girl of his dreams who is right in front of him, a fellow zookeeper named Kate (Rosario Dawson).

There’s a laziness when it comes to ZOOKEEPER’s scripting. The mechanism for making the animals talk is rather lame and doesn’t really make too much sense except to give and excuse for the animals to talk. There’s some heavy-hitter voices here too from the Lion and Lioness (voiced by Sylvester Stallone and Cher) to a monkey that’s voiced by one of the film’s producers Adam Sandler (clearly having fun as a different kind of species).

Then there’s the whole love story subplot. Stephanie is such a horrible person from the opening frames, it’s impossible to think that Griffin would even care about her some five years later. And so much time is spent on this love story angle, the real story between Griffin and his animals at the zoo is somewhat lost.

And for kids, it’s the zoo stuff that is going to keep them glued to the screen.

In fact, the one aspect that works in the film across the board is Griffin’s relationship with sad sack gorilla Bernie (voiced by Nick Nolte). This is really a buddy comedy between the two of them and some of the film’s funniest moments come with their weird little excursions in the big city. If only more of the movie was about that.

James is a likable guy and he certainly knows how to make the best out of the material (which he is partly responsible for fumbling too). Yet, you wish someone would have put together a better premise to hinge James’ talents on. There’s nothing here we haven’t seen before in DOCTOR DOLITTLE or A NIGHT AT THE MUSEUM – and done better as well. And there isn’t any attempt to wring belly laughs out of the talking animals scenario. Casting famous voices as animals only works if you give them funny dialogue to speak.

ZOOKEEPER is a big mess – a film that should have been better considering the premise and the involvement of James, but doesn’t seem to quite pull itself together to satisfy the kids it’s clearly designed for and the parents who will be scratching their heads as they’re leaving the theater wondering whether this film was actually appropriate for their kids to see in the first place.

And that’s not the kind of summer movie you want to be when there are so many choices for parents to take their kids to.