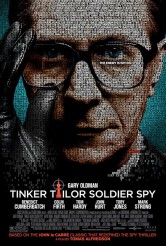 Intricate, dry, erudite and elliptical, faithful to the spirit of its celebrated source material

John Le Carre’s novel TINKER, TAILOR, SOLDIER, SPY is one of the most revered espionage tales ever. Its protagonist George Smiley is the anti-Bond, a British secret agent who wears glasses, has a dodgy marriage and, though he’s no stranger to violence, spends less time dodging bullets than he does wading through bureaucratic b.s.

In 1979, the BBC and Paramount did a miniseries adaptation starring Alec Guinness, which is nearly as beloved as Le Carre’s original tome. Now director Tomas Alfredson (LET THE RIGHT ONE IN) and writers Bridget O’Connor (who passed away last year – the film is dedicated to her) & Peter Straughan have brought forth a feature film version with an impressively restrained Gary Oldman as Smiley. His performance alone makes it easy to understand why everybody involved was willing to brave all the comparisons – Oldman, playing it straight and sane and mournful, gets right to the soul of a good man enmeshed in a bad business.

We’re in 1973 England, where the Cold War with the Soviets is being waged by outwardly cool people. However, from what we see, the British Secret Intelligence Service, also known as MI-6 and here called the Circus, might have prevailed a long time ago if its personnel spent as much time combating the enemy as they do one another. A mission gone awry in Hungary topples the power structure at the Circus, exiling its erstwhile chief, Control (John Hurt), who takes his prized disciple Smiley with him. However, it’s not long before the government comes calling. There is credible evidence that one of the top men at the Circus is in fact a Soviet double agent, but nobody knows who it is. The undersecretary (Simon McBurney) who liaises with the Circus wants Smiley to ferret out the traitor, who might be any one of five MI-6 personnel, including Smiley himself.

It is both a virtue and a flaw in this new version of TINKER that we wouldn’t be entirely surprised or disturbed if Smiley did turn out to be the turncoat. Beyond our sense that Smiley has been an exemplary agent and that the people who ousted him deserve to be punished for their stupidity in forcing him out, we feel rather like we’re watching a living chess match. We wonder at the various strategies, and who will react to Smiley’s actions, but there’s also a conviction that we’re watching a game as old as time. We’ve been put on Smiley’s side, and Oldman’s quiet authority keeps us there, and we know that individual lives are at stake, but we aren’t invested in any particular outcome.

There are wonderful little details, like Smiley’s relief when his prescription for new glasses is filled correctly, and a real nostalgia for better days and camaraderie, with a Circus party flashback that we return to several times. The film is also shrewdly cast, so that we can’t fall back on the old parlor trick of figuring who the adversary is by observing who the biggest name is besides the lead. Benedict Cumberbatch plays Smiley’s aide as a brisk, capable fellow. Of former Control’s opponents at Circus, Toby Jones is aptly stuffy, Colin Firth plays his agent as a man who has been getting by on youthful charm perhaps a little too long and Ciaran Hinds is formidable. Mark Strong registers powerfully and Kathy Burke is glorious as a former agent who misses the old days fiercely.

TINKER, TAILOR, SOLDIER, SPY is everything that one feels it should be. It is complex, intelligent, quiet, intense and keeps its cool throughout.