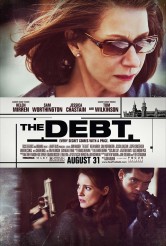 Based on the 2007 Israeli film HA-HOV, THE DEBT moves fluidly between two timelines over thirty years apart. In 1997, Rachel Singer (Helen Mirren) and her ex-husband Stephan Gold (Tom Wilkinson) are jointly proud of their daughter Sarah (Romi Aboulafia), who has written a book about their heroic actions back in 1965/1966, when both were agents of the Israeli intelligence agency Mossad, along with their compatriot David (Ciaran Hinds).

We know from contemporary Rachel’s weary, wary countenance and from David’s extreme distress that something is wrong here, but exactly how much is wrong, and how Sara’s hero-worshipping account differs from reality, we have yet to learn.

Young Rachel arrives in 1965Germanyon what is her first field assignment for Mossad, but quickly proves herself a capable fighter to her comrades, dashing Stephan (Marton Csokas) and reserved but kindly David (Sam Worthington). They are here to capture Vogel, who committed atrocities by experimenting on concentration camp inmates during WWII, and bring him back toIsraelto stand trial. Vogel is hiding in plain sight as a respected obstetrician, so finding him isn’t a problem. However, events take several turns that none of our committed young secret agents can foresee, and three decades later, the fallout is still haunting all of them.

In 1997, the troubles of the past compound themselves in the present, providing Rachel with a series of stark choices.

THE DEBT underscores a conviction that has occurred to decades of audiences and filmmakers, and one that should be known to characters (some of whom are too blind for their own good: ultimately, never mess with anyone played by Helen Mirren. Even when she’s playing a nice English housewife or factory worker, there’s something indomitable about her. Playing an ex-Mossad agent, Mirren accomplishes the difficult task of convincing that Rachel sees herself for awhile as too old and sedate to handle the horrendous crisis that comes bounding back at her out of the past, but we have no doubt that she’s got it in her. For one thing, Mirren radiates a sense of formidable capability here, and for another, it seems unlikely that anyone would cast Mirren as someone who ultimately can’t rise to an occasion.

Chastain is luminous, and physically impressive, as the younger Rachel. The casting of the two younger male actors seems a bit at odds with the older incarnations of the characters, as Worthington looks less like Hinds, who plays him as an older man, than he does like Wilkinson, whereas Csokas (who plays the younger version of Wilkinson) looks very much like Hinds. All of them are very good. Christensen does a terrific job of going from fatherly reassurance to casual, loathsome inhumanity with utter sincerity.

Some of the issues raised in THE DEBT resonate more strongly than do others. We can understand older Rachel’s struggles with figuring out what the right thing to do now is – any action will wind up hurting someone, including herself – but a past decision seems more due to situational exhaustion than either necessity or even expediency. We can empathize with the dilemmas caused after the fact, but when we find out what actually happened inEast Berlin, the stakes aren’t laid out with sufficient strength for us to fully credit that the two most sensible characters would subject themselves to what follows, based on what has happened thus far. It doesn’t ruin the movie, but it does diminish the foundation for the rest of the film.

The screenplay by Matthew Vaughn & Jane Goldman and Peter Straughan, based on the HA-HOV screenplay by Assaf Bernstein & Ido Rosenblum, is directed by John Madden with some real nail-biter sequences and also some that will make people squirm. What younger Rachel must do for her country (and no, it’s not submitting to unwanted advances) will resonate particularly with many female viewers. Madden and the writers also put great tension into scenes where split seconds are the difference between life and death, showing prowess in espionage action filmmaking.

THE DEBT is a good movie. Had it made a more convincing case for the early motives of two of the main characters, it might have been great.