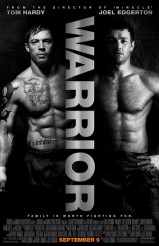 A movie about two brothers who haven’t seen each other for years, the younger not speaking to the elder and both estranged from their father, who both wind up competing out of financial necessity in the same worldwide mixed martial arts worldwide championship match sounds like it’s going to have its share of clichés and melodrama. WARRIOR does in fact offer both, but it also has very strong, committed performances from leads Joel Edgerton and Tom Hardy. Furthermore, director Gavin O’Connor makes the fights matters of real tension and suspense, so that we’re invested in what happens, even when we can guess the outcome.

Actually, anybody who’s seen the trailer for WARRIOR knows for certain where all this is heading, but here’s the set-up. Brendan Conlon (Edgerton) is a loving Philadelphia family man, with devoted wife Tess (Jennifer Morrison) and two young daughters – and a mortgage he can’t pay, due to the medical bills incurred by one child’s now-cured serious illness. Although he’s got a job as a high school physics teacher, Brendan seeks to add to his income by going back to what he did as a younger man – win in a series of cage fights. This isn’t going to bring in enough to save the family home, though, so Brendan hits up his old friend Frank (Frank Grillo) to coach him for a newly-announced mixed martial arts world championship, with a victory purse of five million.

Also hoping for a shot at the five million, for reasons we don’t learn until fairly late in the going, is Brendan’s younger brother Tommy (Hardy), who left town as a child with their late mother, who was fleeing her husband, the boys’ abusive alcoholic father Paddy (Nick Nolte). When Tommy returns to town, he drops in on the old man. Paddy is delighted – he’s been clean and sober for over three years now, though Brendan still doesn’t want to see him face to face. Tommy remains unforgiving, but he still believes Paddy is an excellent coach (albeit Paddy coached Tommy in wrestling, not MMA) and wants to train with him with an eye towards making it into the competition. Tommy wants nothing whatever to do with Brendan, still blaming his big brother for putting school and then-girlfriend/now-wife Tess over Mom and little brother.

The screenplay by director O’Connor & Anthony Tambakis & Cliff Dorfman, from story by O’Connor & Dorfman, strives to avoid egregiously silly dialogue and mostly succeeds. However, they don’t fully succeed in dramatizing the ambivalence that has Tommy continuing to loathe his father on the one hand and relying on him as a coach on the other. This could probably be pulled off dramatically, but it doesn’t receive the kind of insight or empathy to make us feel the tug-of-war within Tommy. Likewise, Tommy’s ferocious resentment of Brendan gets to be exasperating. We know Tommy has been through the mill, and the movie does get around to showing us his better side, but by then, he’s been such a tunnel-visioned pain that we’re slow to fully come around.

This is no fault of Hardy, who has a firm grasp on Tommy’s seething rage and despair. Edgerton exudes decency and determination, as well as a sense of humor; both the actor and the movie have some fun with the physics teacher/MMA fighter dichotomy. Nolte as the sad, repentant patriarch who still conveys a dangerous underside is pitch-perfect in his role.

Surprisingly, where the movie shines most is within the ring. Even though we know what has to happen in the bouts, O’Connor choreographs, shoots and edits the fights so that we flinch at the impacts and become viscerally involved with the punishment the fighters both absorb and inflict. Although wrestling is a big part of what we see here, it has none of the staginess of what is presented by WWE. Combined with boxing and martial arts forms that favor use of legs, it becomes progressively more riveting.