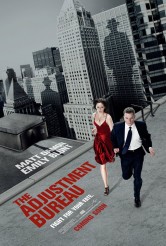 Screenwriter George Nolfi, who has previously tackled THE BOURNE ULTIMATUM, OCEAN’S TWELVE and TIMELINE, makes his feature directorial debut with THE ADJUSTMENT BUREAU (adapted by Nolfi from Philip K. Dick’s THE ADJUSTMENT TEAM). The film has a curious inversion of the usual problem that plagues big science-fiction/fantasy films. Instead of a terrific idea populated by rote characters, here we’ve got delightful characters running (often literally) through a premise that doesn’t seem to have been fully thought out.

THE ADJUSTMENT BUREAU posits that there are squads of usually unnoticed supernatural beings (you shall know them by their hats!) overseeing the lives of certain individuals. One of their charges is young New York Congressman David Norris (Matt Damon), who loses a Senate race due to the ill-timed surfacing of an embarrassing photo. Seeking some privacy, he encounters Elyse (Emily Blunt), a lovely and charming dancer. Conversation leads to a kiss and then Elyse flees what she thinks is hotel security (we know they’re really Adjusters), but David is now inspired to give a concession speech so honest and heartfelt that it sets the stage for a potential political comeback.

Time passes. David takes a job at the firm of his best friend and erstwhile campaign manager Charlie (the terrific Michael Kelly) – and then, due to the failure of one of the Adjusters to make a timely adjustment, runs into Elyse again on the bus. Their flirtation is reignited and David gets to work at exactly the wrong (right) time to see the Adjusters have frozen time and are in the business of “adjusting” Charlie’s mind.

After chasing David all over the building, the Adjusters finally corner him in a parking garage. With few alternatives, team leader Richardson (John Slattery) tells David the truth about what Adjusters do, adding that if David ever shares this information with anyone, David’s mind will be wiped and that David is not meant to be with Elyse. David keeps the Adjusters secret, but he seeks out Elyse diligently for three years until he finds her again. Once more, the Adjusters try to separate the couple and once more, David sets out to defy their warnings.

Damon and Blunt are individually personable and together charming here. If we don’t exactly burn ourselves for the couple, we do believe them when they say they have never before felt about another person what they feel for one another. Even better, filmmaker Nolfi allows the pair to share an affinity for one another – they have a courtship we enjoy watching. There is also great humor courtesy of the Adjusters, particularly Slattery, who gives Richardson a wry, sly aspect that makes him feel like a combination of spy and salesman. Anthony Mackie makes more than is on the page of his integrity-driven Adjuster Harry Mitchell and Terence Stamp puts the right supernatural spin on his super-Adjuster Thompson.

The city of New York is represented and photographed beautifully here, from its parks to its unique architecture to its scenic coastline. So what’s the problem? For one thing, in a movie about fate, it seems a bit weird that David and Elyse keep running into each other. Granted, the script and the Adjusters note this weirdness, but the explanation provided seems like it should prompt a whole other course of action. The more we know about the mythology of the Adjusters, the more it seems arbitrary and convenient, tailored to fit the sequences the filmmakers want to do rather than adhering to internal logic. Finally, there is the verbal exposition as to what’s happening, which is so clumped and on the nose, to say nothing of questionable, that the actors who must deliver it deserve not only commendation, but arguably extra compensation for handling it with such grace.

THE ADJUSTMENT BUREAU has character, warmth and energy, though it is probably best appreciated if one doesn’t examine its fantasy underpinnings too closely.