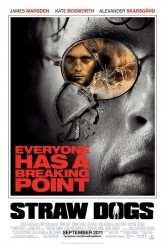 In 1971, director/co-screenwriter Sam Peckinpah made a heavily controversial splash with STRAW DOGS, an adaptation of the Gordon Williams novel THE SIEGE AT TRENCHER’S FARM. Dustin Hoffman starred as an American academician who moves to a rural village in England with his wife (Susan George) and quickly rubs the locals the wrong way to such an extent that violence erupts.

Director/screenwriter Rod Lurie’s remake transplants the action from the U.K.to the small town of Blackwater,Mississippi, where Hollywood screenwriter David Sumner (James Marsden) and his wife Amy (Kate Bosworth) plan to spend the summer in her huge old family home. They hit the local bar, where David finds that Amy is a local celebrity, courtesy of her supporting role in a TV series. David meets Amy’s old ex-football star boyfriend Charlie (Alexander Skarsgard) and his crew. David hires Charlie and Co. to fix up the barn on the property, which leads to all sorts of class and cultural tensions, to say nothing of Charlie’s conviction that Amy wants him back. David is also introduced to Tom Heddon (James Woods), the town’s aggressively alcoholic ex-football coach who is obsessed with keeping his fifteen-year-old daughter (Willa Holland) away from large, mentally disabled Jeremy Niles (Dominic Purcell).

For a good while, filmmaker Lurie sets the stage for the class conflict between wealthy city-bred David and the locals, who find everything about him offensively condescending, with David oblivious to his impact. There also is, or at least seems meant to be, some sort of tug-of-war within Amy between her aspirations for the life she has now and the ties to her past. Finally, there’s the notion that most of the adult men in town are living in the shadow of the high-school athletic heroes they used to be, with their own dreams dashed. This last aspect is discussed but doesn’t seem to have much impact – it’s hard to say how Charlie’s behavior would be any different if he had planned to be a construction worker for his entire life.

As for Amy, the character has been made a lot more coherent than she was in the Peckinpah film, but she still does some things that don’t make sense. Likewise, David’s behavior toward her at times is mystifying. These people have a shaky marriage, but again, this doesn’t wind up impacting the plot.

What STRAW DOGS means to be moving toward is the passive David being riled into defending himself, Amy and their house, but there’s less a sense of injured pride and any sort of huge internal change within the character than there is simple horror-movie pragmatism. Lurie has said in an interview that his STRAW DOGS is not about pointing out how everyone can be reduced to a savage, but rather about how a non-violent man may need to use violence when the alternative is death. Fair enough, but there isn’t anything philosophical in the way the last act plays out. Lurie takes time to give the psychology of the aggressors its due, but David is simply being pragmatic. Either some much-needed connective tissue has been edited out, or else we don’t get enough of David’s sense of himself to have any kind of intellectual/emotional twinge when he does what most rational characters in his by-now-horror-movie predicament would do.

From a cast standpoint, the standout here is Skarsgard, who gives Charlie a powerful internal life with the kind of ambivalence and unspoken thoughts that make him a rounded character. Walton Goggins (of JUSTIFIED) is wonderful but not given much to do.

A side rant – the point at which both David and Amy have different, but similarly non-livid, reactions to someone (presumably Charlie or one of his guys) killing their cat will exasperate if not infuriate pet owners in the audience. The movie treats the incident essentially as property damage, which is going to make a lot of viewers angry at all of the characters across the board, even before David is drawn into an act of violence against a wild animal.

STRAW DOGS burns slowly for its early portions, exploding into a home invasion violent action piece in its final segments. It handles both decently, but doesn’t tie them together in a way that results in a satisfying whole.