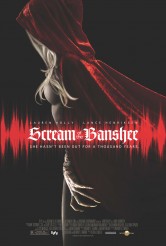 ©2011 After Dark Films
SCREAM OF THE BANSHEE poster
Reviews

Movie Review: SCREAM OF THE BANSHEE

The banshee – or bean sidhe, as it is known in Celtic folklore – is a spirit whose wail signifies imminent death. In SCREAM OF THE BANSHEE, the quasi-preserved head of a banshee winds up in an anonymous box in the antiquities department of a college. When Professor Whelan (Lauren Holly) and her student aides, including her daughter Shayla (Marcelle Baer), unknowingly open the box, all hell breaks loose.

The banshee in its “real” form bears an entertaining resemblance to the title beings of CRITTERS, though here it takes on a number of guises. Given that the banshee can cause vivid hallucinations in its efforts to get its victims to scream in response, it also bears a thematic kinship to Freddie Krueger, though thankfully this monster doesn’t quip (or even speak, for that matter).

The puzzle-solving aspects of the plot as crafted by writer Anthony C. Ferrante (BOO, HEADLESS HORSEMAN and AX co-founder), from a story by Ferrante & Jacob Hair, are intriguing, and Lance Henriksen is always a welcome addition to a genre offering (in this case, he plays a crazy ex-professor).

The rules about who dies immediately, who gets haunted and what exactly constitutes “screaming” are a bit blurry, but there are good jump scares. There is also one very nifty gizmo in the form of the head-containing box, which turns out to be such a potent weapon in its own right that it seems like the knights who originally went after the banshee (a pursuit we see in the opening sequence) might have skipped the whole attempt to capture the supernatural scream and just made a few more boxes. That of course would be a whole different movie, but it could still be a fun spin-off.

Holly seems like someone both educated enough and stressed enough to be a real college professor and Eric F. Adams is good as the Henriksen character’s wary ex-associate. Director Steven C. Miller has lined up a lot of good locations to give the movie both production value and horror-suitable grunge.

As supernatural creature features go, SCREAM OF THE BANSHEE comes off as unexceptional, but perfectly acceptable.