Home » Exclusive Interview: Jasper Fforde on ONE OF OUR THURSDAYS IS MISSING – Part 1

Exclusive Interview: Jasper Fforde on ONE OF OUR THURSDAYS IS MISSING – Part 1

The author talks about his new Thursday Next book 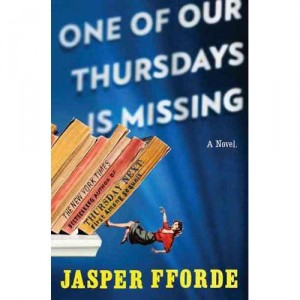 Jasper Fforde’s series of books about the heroine Thursday Next are as difficult to describe as they are delightful to read. Imagine a somewhat alternate version of Britain where audiences respond to Shakespeare stage performances the way midnight moviegoers enjoy THE ROCKY HORROR PICTURE SHOW.

Now also imagine there’s a secret branch of the government, Jurisfiction, charged with making sure that fictional characters don’t jump from book to book and wreak havoc. Thursday Next is an agent of Jurisfiction, but in Fforde’s newly published ONE OF OUR THURSDAYS IS MISSING, the sixth in the series (following THE EYRE AFFAIR, THE WELL OF LOST PLOTS, LOST IN A GOOD BOOK, SOMETHING ROTTEN and FIRST AMONG SEQUELS), she has vanished and her fictional counterpart must find her – provided that the fictional Thursday doesn’t turn out to somehow be the real Thursday.

Speaking by telephone from a hotel room in New York, where he’s on tour promoting ONE OF OUR THURSDAYS IS MISSING, Fforde discusses the new book, the old books and more. Note that those who missed Fforde on his U.S. visit can meet him in Swindon in the U.K., where a convention in his honor, the Fforde Fiesta, will be held May 27-29 (see Fforde’s website jasperfforde.com for details).

ASSIGNMENT X: What was the core idea for the universe of the THURSDAY NEXT books?

JASPER FFORDE: I think the core idea was that all the characters inside the book – there must be something more, that they exist in a sort of a real fictional world when you’re not reading them. Where do they all go? I suppose that was the idea. When you close a book, all those characters in there, what do they all do when they’re not being read? Do they sit around and talk or do they get up to mischief? And the more I thought about it, and the more I thought, if there’s a BookWorld [where] characters can move behind the scenes from one to the other, then there was a rich possibility of ideas here. Once I latched onto that and used the framework of having a policing agency that dealt with all the mischief and error, then that’s really set the whole series running.

AX: How did Thursday’s personality and the rest of her various worlds come about?

FFORDE: She was originally designed to give credibility to the central idea of the first book – Jane Eyre was kidnapped out of JANE EYRE and someone has to get her back. Now, that can’t really happen in our world, so I thought, well, I’ve got to invent a slightly different world where everyone is much more excited by literary matters, but it’s no less violent. So let’s make this strange, curious, off-kilter world. I needed a character to be in it, so I thought, well, Thursday Next is as good a character as any, and then it was really what kind of person would be working as a literary detective in this rather strange, violent, literary-centric world. So in many ways, the world and the central idea of having Jane Eyre kidnapped out of JANE EYRE kind of dictated who Thursday was, but I think she’s in many ways a strong female lead detective who really wants to do the right thing, and there’s an awful lot of mischief and stuff out there that she tries to stop.

AX: At what point did you decide that there would be books about Thursday Next within the THURSDAY NEXT universe?

FFORDE: Well, as the series progressed and I found there is seemingly no limit to what we can play with in the fictional world, I thought, “Well, if Thursday exists in her world, and she goes into the fictional world, what would happen if she were written about?” And the answer is that there would be versions of her in the BookWorld. And we can play with this, of course, because – like any biography or autobiography – the written person is not necessarily like the real person. So I could actually play with the idea of several Thursdays, [the real one and] two entirely different written Thursdays in FIRST AMONG SEQUELS, and we could actually look at the ways in which a character like Thursday could have been looked at by different writers.

AX: As far as the plot of ONE OF OUR THURSDAYS IS MISSING, did you think, “I’d like to return to that universe, but with a slightly different voice, and what would the plot be?” or was it, “What would happen if Thursday went missing?”

FFORDE: It was really me saying, “I want to set another book in the BookWorld.” One of my favorite books in the THURSDAY series is THE WELL OF LOST PLOTS. There’s a lot of imaginative invention, which I enjoy a great deal, but there was also a Thursday in it who was slightly timid, and she was just coming into the BookWorld, and she was being slightly lost and uncertain, and that was actually a good position to be in, I thought, for a protagonist. I wanted to emulate that, but I didn’t want to go back to that time with that Thursday. I thought, “Well, I’ve got to progress the story, so the best thing to do here is to actually have another Thursday, who is like Thursday was when she arrived – slightly uncertain, slightly worried. Let’s have the real Thursday missing and the written Thursday as the hero of the story, and she’s trying to find the real Thursday.” Taking that idea as the central theme allowed me to ask all kinds of questions about the relationship between the written Thursday and the real world, and also really to paint a picture of a BookWorld in a bit of turmoil. There are all sorts of things going on. You have problems with Racy Novel, the lack of metaphor and all these issues, and that was really the jumping-off point.

FFORDE: Yes. She has a lot of decisions to make, because she knows she’s not a patch on the real Thursday, but she does have some of the attributes of Thursday, so she takes it on herself to really prove to herself that she can be like her [real] self and find her [real] self, which kind of makes it sound unbelievably complex. This wouldn’t have been the second book in the series, or even the third, or even the fourth, for that reason. I think it’s the first true sequel, because it’s a book that it would really help if you were to read at least a couple of the previous ones – not just to understand how the BookWorld works, but also the fantasy storytelling grammar that I supply. Once you’re completely up to speed with that kind of storytelling grammar and the gags and jokes and the way my mind works, then the whole thing just becomes very normal indeed.

AX: Did your mind work this way completely before you got involved in writing the THURSDAY NEXT series, or has writing these books somewhat changed the way you think?

FFORDE: It hasn’t really. The thing about the THURSDAY books is that they are in their own way entirely logical. Although very strange things happen, they happen for a reason. The logic is for the most part consistent. I think that’s very important. When you’re writing fantasy, when you’re writing alternative worlds, the logic has to be there, it has to be consistent, it has to all hold together. So for the most part, I’m actually thinking logically, and I go, “Okay, what if there are two Thursdays, one written, one real. How would they interact together?” And once you start playing with these ideas and then actually running with them to their conclusions, it is essentially the same as writing any other book. I’ve just moved the ground rules to begin with, so the logic is there, the human interaction is there. You read them and you say, “Well, I recognize the relationship.” The relationship between the written Thursday and her alter-ego better half is a bit like having an elder sister who is better at school and better at everything and plays net ball [volleyball], and she’s missing, and you have to try and look for her and try and do the things that she used to do and the things that you most admire about someone like an elder sister. So there’s lots of stuff that’s recognizable, and although the situations are complex, I think the interactions are not. They’re very much standard human reactions.

AX: Did you always plan to write the THURSDAY books in the first person?

FFORDE: No, not originally. When I was first writing THE EYRE AFFAIR, it was told in third person. I felt I wasn’t really getting into the head of Thursday, and I thought, “I wonder if I just change it to the first person, would that make more sense?” Because I’d never written in first person before. And I did, and the books just carried on in first person. It seems to work.

AX: Were you already a novelist before the THURSDAY books hit big?

Tags: First Among Sequels, Jane Eyre, Jasper Fforde, Lost in a Good Book, Nursery Crime, One of Our Thursdays Is Missing, Something Rotten, The Eyre Affair, The Well of Lost Plots, Thursday Next