Home » Book Review: ONE OF OUR THURSDAYS IS MISSING by Jasper Fforde 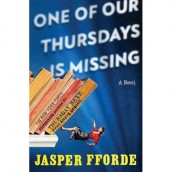 Book Review: ONE OF OUR THURSDAYS IS MISSING by Jasper Fforde

A brilliant, delightful return to Jasper Fforde’s fantasy series about the inner lives of book characters

Reading one of Jasper Fforde’s BookWorld novels is like watching a circus acrobat who folds himself in half while climbing a tightrope while spinning ten plates with his hands and juggling bowling pins with his feet. Unless you’ve got physicist-level math skills – not that these intricate, literate, hilarious tales have anything to do with math – it’s best to sit back and be awed and delighted; trying to figure out how it’s done will only make you insane.

Thursday Next, as introduced in Fforde’s first BookWorld novel THE EYRE AFFAIR, lives in a world somewhat but not completely like ours. (For one thing, there’s an issue with cheese smuggling along the England/Wales border, a detail which crops up from book to book.) Thursday is an agent of Jurisfiction, a secret branch of the government that makes sure books – that is, the ones we read – maintain their order and don’t, say, have Mr. Rochester leaving JANE EYRE to take up residence in some other fiction entirely. Thursday has the talent of actually entering the BookWorld, where the characters in books are sort of like actors in plays, doing their roles while someone is reading them in the OutWorld, but otherwise having different lives and personalities.

And that doesn’t begin to cover the complications of the story or the universe. Readers of the Thursday Next series should remember that the written books in Thursday’s world are not the written books we’re reading (for one thing, we may never know the full impact of THE GREAT SAMUEL PEPYS FIASCO). What’s amazing is how accessible Fforde makes everything, partly courtesy of Thursday’s ever-companionable voice, with what feels like effortlessly humorous observations and method of explaining things, and partly because there’s some new bit of creativity lurking around every paragraph.

Nothing is too big or too small to escape Fforde’s field of satire, so references to Daniel Radcliffe pop up not far from a subplot concerning the Lady of Shalott, while written Thursday’s longing for real Thursday’s husband Landen (who isn’t in the BookWorld Thursday’s life) gives her more dimension than she may believe she possesses. There are puzzles for the reader, mysteries, puns, whole subplots about character back stories as a concept, and much more.

Fforde’s fiction is all about how fiction is made, but rather than being deconstructionist, it’s celebratory. ONE OF OUR THURSDAYS IS MISSING, like its predecessors, is for people who love books and feel that, on some level, they have an inner life. Here’s a whole fantasy realm that agrees with and eloquently elaborates on that notion, with boundless imagination and warmth.

Tags: Book, Jasper Fforde, One of Our Thursdays Is Missing, Thursday Next, Viking Adult, novel