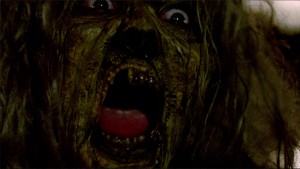 SCREAM OF THE BANSHEE | ©2011 After Dark Films/Syfy

SCREAM OF THE BANSHEE is the Syfy Channel’s 200th original Saturday night movie, airing tonight at 9 PM which stars Lauren Holly as a college professor who unleashes a powerful Banshee and needs the help of Lance Henriksen to stop it.

BANSHEE’s screenwriter  Anthony C. Ferrante (and AX‘s co-founder) marks the occasion by telling us all about banshees and why it’s cool to have a movie on Syfy.

ASSIGNMENT X: Was SCREAM OF THE BANSHEE selected specifically to be Syfy’s 200th original film, or did it just work out that way?

ANTHONY C. FERRANTE: It just turned out to be we were the 200th one, and I think it’s pretty cool. I directed HEADLESS HORSEMAN for them, [wrote] HOUSE OF BONES with Jay Frasco, and they acquired BOO [which Ferrante wrote and directed], so this is the fourth project that I did for them. I’ve said it before to people, but I’ll say it again – I think the great thing about the Syfy Channel movies is it’s the longest-running anthology genre TV series ever. Even though they’re movies, they’re essentially a two-hour weekly anthology and run the gamut of creature features to  horror and disaster, but it’s an anthology series at heart.  I also love that I’m one of their horror guys, so that’s kind of cool.

AX: Was BANSHEE your original concept?

FERRANTE: It was an original concept. After Dark were partnering up with Syfy and they wanted me to write a script for them and so I started pitching ideas, because usually the process is, you come up with a handful of different ideas and then you narrow it down. One of the things I’ve been wanting to do for a long time is a banshee movie, because I love the mythology and it hasn’t been overdone and they felt the same way. Basically, I had to come up with a whole bunch of variations on what the story could be until we settled on what’s in the movie. It’s cool, because it’s something I’ve always wanted to do and I got a chance to finally write a banshee movie. 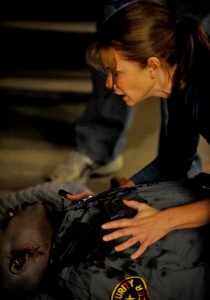 AX: What is the banshee mythology?

I wrote the story with a buddy of mine named Jacob Hair, who I wrote THE KEY with, which is a script we’re trying to set up as my next directing gig. We were throwing around a whole bunch of ideas and we started talking about the idea of the banshee as a weapon. [If] you hear a scream and you die, wouldn’t it be great if an army had that scream? So then I started looking into the Templar Knights, and there was the Scottish Templar Knight Order and I thought, “Well, if they could fabricate some kind of weapon that could capture the head of the banshee mid-scream, then all they would need is to take that box, or whatever was holding the head, into battle, open it up, and an entire army is doomed to die.”

So we came up with this Templar box that Jake sketched it out, which essentially is this Templar cross that, when it’s thrown in the air, it’s like a flying guillotine. You pull a chain and it unbuckles and then snaps off the head and it becomes a box. So the idea is that this box never got used in battle and ended up disappearing. And now we’re in the present day where this archivist played by Lauren Holly is going through the school’s various artifacts that have been corralled over the years, and archiving and boxing the stuff up. And she comes across the banshee box and some other things that tie into it and [the characters] end up opening the box and they release the banshee’s scream.

One of the struggles in trying to do any kind of horror movie is coming up with ways to not have the typical, “Oh, I purposely brought a banshee over from Ireland and it’s going to kill people,” that kind of thing. It’s trying to figure out how can you have something where someone’s not doing something intentionally and they’re cursed by doing their jobs, not by – 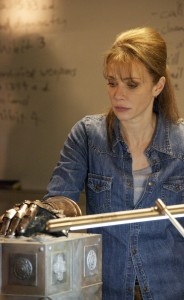 FERRANTE: Exactly. [The archivist is] just doing her job, they’ve got to archive this stuff and they’ve got all these little pieces of the puzzle and they’re going, “Well, what is this?” They open it up and they say, “Okay, what the hell was that?” But they were doing their jobs. That’s the thing I like about it. Once they realize that there’s a curse involved, now they’ve got to figure out why, and that involves a professor at the college named Broderick Duncan, who’s played by Lance Henriksen. This Templar box is sort of his Don Quixote thing, it’s his windmill. He’s been searching for this for awhile [for] his own reasons. He was kicked off campus because he was obsessed with it.

AX: Were you given any parameters of, This much CGI,” “This much blood,” that kind of thing?

FERRANTE: The parameters are usually structural than anything. I love the collaborative process working with both After Dark and Syfy and having worked with Syfy multiple times, I do understand their structure and I understand the parameters of budget and all of that. I think you have to understand you’re not making a fifty-million-dollar movie, but it doesn’t necessarily mean you can’t have big ideas. So you work within those boundaries.

There is also self-imposed discipline of trying to find a way do things differently with a familiar structure and that’s the fun part of it. I always like to find a theme or metaphor to work with. In this film, the theme is really communication. You have a banshee that is this raging scream-aholic creature, and you have all these characters that have an inability to have simple conversations with each other. They don’t know how to deal with each other, especially the mother/daughter relationship in the film and I think that’s an interesting thing. You have this external thing and you have all this internal stuff.

AX: How is it writing a script that you’re not directing.

FERRANTE: Sometimes you have babies you raise, and some times someone else raises them. The key is to do your best job at creating the vision you see for the film on the page and then let the director adopt it and put their own spin on it for better or worse.

AX: What other projects do you have coming up?

FERRANTE: I’m working on another project right now with After Dark that should start very soon and there’s another ghost project that’s percolating with another company. I never seem to get too far away from the supernatural genre – but I also love that realm too.

I also have THE KEY, which I wrote with Jake that I’ll direct once we get the financing in place. It’s a really cool science-fiction thriller. We’ve got thirty or forty pieces of beautiful  conceptual art completed. It’s a very ambitious project. I also finished a script recently called AGONY, which is a self-contained thriller set in one location. It was another one of those exercises where I didn’t want to write a body count movie, but I wanted to do a really scary thriller with only four characters and find a way to keep information from each of the characters in the script, but also keep key information away from the audience. It was a blast to write and it’s going to make for a very suspenseful movie.

I’m also attached to a comedic Web series to shoot later this year and there’s another project called CONTAMINATED that I’m involved with as well. So there’s a whole bunch of projects floating around. It all comes down to which trigger gets pulled first.

CLICK HERE for an interview with AREA 51 director JASON CONNERY