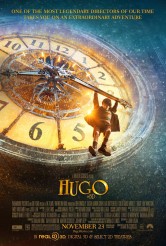 A gentle, charming film about the origins and wonders of movies

Anyone not acquainted with the subject matter of Brian Selznick’s book THE INVENTION OF HUGO CABRET might wonder what about it caused Martin Scorsese to decide to make a family film. The attraction becomes clear while watching director Scorsese’s HUGO, from John Logan’s screenplay – the hero of the title (Asa Butterfield) may be a Parisian orphan in the ‘30s, but the movie is mainly concerned with the origins of the cinema.

Young Hugo’s loving father (Jude Law) dies in an accident, but not before teaching Hugo a great deal about the workings of clocks and watches. Hugo’s Uncle Claude (Ray Winstone in a cameo) takes the boy on as an assistant in keeping the clocks running in Paris’ central train station. Hugo is generally left alone to both work and forage for himself. He steals bread and also pilfers metal odds and ends from the booth of a toymaker (Ben Kingsley) who has a stall in the station.

The toymaker catches Hugo in the act and makes him empty his pockets. In addition to the bits Hugo has taken from the toy stall, he also has a notebook full of sketches of a mechanism. Hugo won’t say where he got the notebook and the toymaker, visibly distressed, won’t give the notebook back. In his efforts to retrieve the notebook, Hugo meets the toymaker’s goddaughter Isabelle (Chloe Grace Moretz), who is about Hugo’s age. Isabelle loves books, but has never seen a movie. Hugo loves movies, but has never read a book. When Chloe brings Hugo to her favorite book lender (Christopher Lee) and Hugo sneaks Chloe into a movie theatre to see Harold Lloyd’s SAFETY LAST!, it’s the beginning of a beautiful friendship – and also the beginning of the unraveling of the mystery surrounding something Hugo’s father has left for him and its connection to Isabelle’s toymaker godfather.

There is a great spirit of love around HUGO that allows us to buy into the joy Isabelle feels when watching Lloyd dangling from a giant clock hand in the famed silent action comedy. As the children make their discoveries, Scorsese and Logan happily show us scenes from real silent film classics, especially science fiction and fantasy pieces, which the director, cinematographer Robert Richardson and a topnotch post-production team make luminously gorgeous. Instead of quaint and creaky, the historic pieces seem actually magical, to us as well as to the characters. Little wonder they are enthralled.

There are various subplots about the train station that don’t get the same level of passion but are nevertheless pleasant, playing out a bit as though they were conceived for ‘30s and ‘40s films and then made a bit subtler for contemporary sensibilities. Sacha Baron Cohen plays a station policeman obsessed with orphans for a surprising reason and Emily Mortimer plays the flower-selling object of his affections, while Frances de La Tour and Richard Griffiths are two elderly friends stymied for awhile by the woman’s grouchy dog.

Although the 3D isn’t absolutely required to make HUGO work, Scorsese does have a lot of fun with the format, giving great depth and breadth to the intricate settings and giant clockwork mechanisms. Although steampunk is generally associated with the late 1800s, a good deal of Dante Ferretti’s production design will appeal to aficionados of that genre.

Butterfield and especially Moretz are captivating in their roles, with an ability to express delight and an unforced sense of urgency. Kingsley gives a restrained, affecting performance and Helen McCrory puts some sexuality as well as warmth into her portrayal of his wife. Lee adds another layer of cinematic history to the project. The other actors all do similarly high-caliber work and sharp-eyed viewers will spot director Scorsese as a photographer and producer Johnny Depp as a band musician.

HUGO moves at a more deliberate pace than most movies meant to include youngsters. It never feels as though it is lecturing (the way Woody Allen movies sometimes do on the topic of Ingmar Berman, for example), mainly because it’s so evident that the filmmakers are utterly enchanted with their subject and not just what they have to show and tell us about it. HUGO is reverent, but also joyful – we come away from the film feeling like we’re lucky to have all this in our history. (Several of the characters are real people, but it wouldn’t be fair to say who they are in a review.) However, viewers who go to movies without comprehending the concept of loving movies (and there are a lot of these folks) may wind up somewhat bewildered with the thrust of the story.