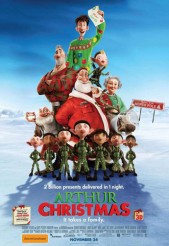 Some fantasy subgenres are so populous that they have arguably outgrown the designation of “sub”: the lovelorn vampire, the quest through mystical lands, the zombie apocalypse. Add to this list (and check it twice) the genre of Santa having gift delivery issues on Christmas Eve. The newest iteration of this last is ARTHUR CHRISTMAS, the first 3D CGI animation (as opposed to stop-motion Claymation) offering from Aardman, the company behind WALLACE & GROMIT.

In ARTHUR CHRISTMAS, Santa Claus is a job title, handed down to the men in the Claus family since the days of the original St. Nicholas. The current Santa is Malcolm (voiced by Jim Broadbent), who presides happily if ever so slightly absentmindedly over an army of elves that could give Navy SEAL teams lessons in stealth and operational tactics. Malcolm’s older son Steve (voiced by Hugh Laurie), so gung-ho that he wears red and green camouflage, runs the high-tech doings with military precision. Santa now has a high-tech cloaked airship instead of reindeer and all manner of computer paraphernalia to make sure he gets where he’s going on time and that no regular people ever see him.

Meanwhile, Santa’s idealistic younger son Arthur (voiced by James McAvoy) works in the letter-answering department. Arthur reveres both his dad and the generation notion of Santa Claus. When it turns out that the gift of a single little girl has been left behind at Santa’s workshop, Arthur is certain that his dad will be out of his mind with worry and regret at this oversight. Circumstances lead to Arthur attempting to deliver the gift himself with the aid of ornery Grandsanta (voiced by Bill Nighy) and gift-wrap specialist elf Bryony (voiced by Ashley Jensen), via Grandsanta’s mothballed old sleigh and eight reindeer. Chaos ensues.

The story of ARTHUR CHRISTMAS is nothing new in its broad strokes but, like its hero, it has a genuinely good heart. It also has an actual sense of nuance that is too often missing from children’s films, so that none of the main characters, even the misguided ones, do anything really unforgivable. The film ably illustrates the notion that it usually takes both compassion and tactics to accomplish anything worthwhile.

Claymation still looks more dimensional, not to mention tactile, than CGI, 3D or no 3D. It’s easy to appreciate that CGI may lend itself more readily to visuals of elves engaged in Tom Cruise MISSION: IMPOSSIBLE-style missions, but we do lose a little of the inherent hilarity of Aardman’s erstwhile medium.

The voice cast is ace, with McAvoy radiating sincerity, innocence and goodwill as Arthur and Hugh Laurie perfectly uptight but not inhuman as Steve. Broadbent is wonderfully jovial with a hint of shady bureaucracy as the current Santa, and Nighy goes from ferociously bossy to something much sadder as Grandsanta. Jensen is consistently funny as the high-pitched but dedicated Bryony.

ARTHUR CHRISTMAS doesn’t exactly break any boundaries, but it is coherent and consistent in its themes of inclusiveness and caring. It puts its story where its mouth is in terms of defining what is commonly perceived as the holiday spirit and it’s entertaining. This is more than many Santa-gift-delivery-issue movies, past, present and no doubt future can boast.