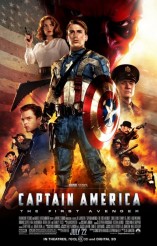 There’s nothing terribly wrong with CAPTAIN AVENGER: THE FIRST AVENGER as these things go. Chris Evans is likable and puts conviction into the title role, one Steve Rogers of Brooklyn, who desperately wants to enlist and fight for his country during WWII. Alas, Steve doesn’t meet the U.S. Army’s health requirements, but he is ultimately brought into an experimental unit. Thanks to a cocktail of drugs and movie science, transformed into a super-soldier on the outside, though he remains the same decent fellow within. After a stint as a captive fundraising hero, Steve gets into the field. Here he comes up against his German opposite number, Schmidt (Hugo Weaving), who got the same drugs in their less-developed, more side-effect-producing stage.

This is all fine, but if you sense a lack of urgency in this synopsis, then it accurately reflects the tone of the film. It’s not that the characters lack purpose, but there seems to be less inspiration of the, “Ooh, and this story let’s us do this!” variety that there is in, say, IRON MAN or X-MEN: FIRST CLASS than there is workmanlike, “What do we put here to connect that bit and this bit?” The answers in all cases are serviceable and usually even diverting, but there’s little in CAPTAIN AMERICA that will strike viewers as something they are essentially seeing for the first time, or at least in a new way. Things are in a near-constant state of crisis – there’s a war on, after all – but the plentiful action montages dilute the impact of the longer scenes. Director Joe Johnston never lets the pace lag. He and Evans get us to invest in Steve’s visceral need to serve his country, but other big emotional beats come and go without resonating much for us, although they are honored in the narrative.

A lot of comic book movies have something tied to their original print medium that the film version has to spend a lot of time explaining. Here, it’s the Captain America costume and moniker. Granted, the script by Christopher Markus & Stephen McFeely, based on the comic books created by Joe Simon and Jack Kirby, does a good job of demonstrating how and why the sensible, modest Steve winds up in that gaudy suit, but since the public has already seen his face, and the war bond fundraisers are capitalizing on his popularity, the mask seems counter-productive.

Evans plays things commendably straight, making Steve a good man who truly wants to do the right thing. Stanley Tucci is twinkly and enjoyable as Steve’s scientist mentor and Tommy Lee Jones brings jovial but gruff authority to the ranking U.S. military man on the scene. Toby Jones puts a hint of conscience and sanity into his erstwhile Nazi scientist. Weaving is fine as a Nazi baddie, but his red makeup in the latter portions of the movie, no matter how faithful to the comics, looks unreal in the context of the surroundings, the more so because of the color-leeching 3D process.

The laboratory sets benefit from the 3D process, which makes the interiors look even larger and more intimidating than they originally were. However, some of the stuntwork and visual effects suffer as a result of the 3D, as it makes some elements in composite shots look flat in the foreground.

There are some bits of Nordic folklore here that seem as though they belong with this year’s earlier Marvel film THOR, but as both Thor and the Captain will be fighting side by side in next year’s AVENGERS film, perhaps this is laying the groundwork for the mingling of mythologies.

Due to the fact that CAPTAIN AMERICA has a wraparound sequence that starts the film, it seems like the Marvel tag that customarily comes after the end credits now ends the film proper, as this also contains the movie’s finale. (At any rate, there was no post-credit sequence at the press screening.) This nicely sets up Captain America’s inclusion in AVENGERS, while also wrapping up Steve’s ‘40s ambition and destiny in appropriate fashion.

CAPTAIN AMERICA: THE FIRST AVENGER is an agreeable diversion. It’s rock ‘em, sock ‘em comic book fun, but unlike many of the onscreen locations, the story never really catches fire.