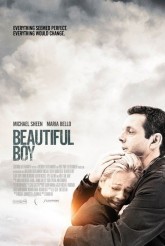 It’s rare for a movie to make its case so thoroughly that it is sometimes hard to watch, but that’s the case with BEAUTIFUL BOY, a movie about two people going through an emotional journey so hellish that, in comparison, 127 HOURS really seems like a movie about a brief mishap on a bicycle ride in a national park.

Longtime married couple Kate (Maria Bello) and Bill (Michael Sheen) have a marriage that seems to be held together mainly by routine. They have lost the ability to talk with each other about anything substantial. Both love their college student son Sammy (Kyle Gallner), but they don’t know how to talk – or listen to – him either. Still, everything seems okay. Then one day there is a mass shooting at Sammy’s school. The police come to the door. The terrible news isn’t only that Sammy is dead, though he is, but that he was the shooter who killed seventeen people before taking his own life.

Bill is still alert enough to figure out how to avoid the media. He and Kate then individually embark on every coping strategy that either instinct or intellect suggests. One by one, they all shatter, leaving a wreckage of grief, guilt and helplessness that is devastating to witness.

Director Shawn Ku and his co-writer Michael Armbruster eschew sensationalistic confrontations, as well as any direct presentation of the shootings, so that we are like Kate and Bill, with no means of escaping from the emotional horror. On the one hand, this is very potent stuff and Bello and Sheen (working with a wholly unobtrusive American accent) are both able to embody it with conviction, scathing anger and absolute pain. On the other hand, because Kate and Bill are already in a state of quiet desperation before Sammy’s homicidal rampage, we find ourselves a little annoyed by them as observers. Yes, these are precisely the kinds of ordinary people whose lives are upended when a family member unexpectedly goes off the rails, but authenticity doesn’t always equate with being interesting to watch. The filmmakers let some of Kate and Bill’s phases last a little too long – this may well be true to life, but we know this is a film and there are sections where empathy starts morphing into impatience.

Even so, BEAUTIFUL BOY mostly does a powerful job of putting us in the hearts and minds of people trying to figure out how to live with themselves, let alone each other, after a calamity that challenges nearly all of their beliefs. Bello takes Kate through a cycle of wanting to defend Sammy, wanting someone to blame, wanting to be heard and felt, wanting isolation and then wanting more. Sheen is brilliant going from a sort of emotional denial to real fury to desolation. The two performers are both excellent. Also strong are Alan Tudyk as Kate’s supportive brother and Moon Bloodgood as Kate’s sister-in-law, who is ever so slightly worried that whatever Kate and Bill did wrong may rub off on her own child.

There are a couple of filmmaking missteps, one of them in a prologue section that shows Sammy as a blond, blue-eyed little boy before the role is taken over by the dark-haired, dark-eyed Gallner. The casting discrepancy leaves us trying to figure out whether Kate and Bill have a second child for several scenes. Another, more arguable point is the depiction of Sammy. While we only see him in brief flashes, he seems despairing and depressed but not full of rage towards others. We understand how the character we see might kill himself, but not any sign that he might harm others. Granted, Kate and Bill are trying to hide from knowing if anything set their son off, but there is a suggestion that there indeed was something specific that caused Sammy to snap, and it feels disingenuous never to show this to the audience, as well as Kate and Bill. Given that they seriously wonder whether they caused Sammy to become what he is, don’t they want to know what Sammy had to say about it in the end?

BEAUTIFUL BOY is imperfect, but what works about it is very potent indeed.