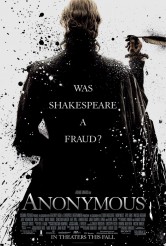 A favorite candidate for the nobleman of this last theory is Edward De Vere, Earl of Oxford. ANONYMOUS, written by John Orloff and directed by Roland Emmerich, takes this concept and runs with it into some pretty bizarre though moderately entertaining territory.

Edward, played as a mature soul by Rhys Ifans and in his younger days by Jamie Campbell Bower, starts life as one of the richest people in England, but when he’s taken into the household of Sir William Cecil (David Thewlis), the clouds start to lower. Sir William arranges for Edward to have a wonderful education, but as a Puritan, the master of the house is profoundly anti-art. Edward’s work does find favor with the young Queen Elizabeth (Joely Richardson), but due to a series of unfortunate events, Edward is banished from court and cannot put his own name to his work. He comes to the rescue of working-class playwright Ben Jonson (Sebastian Armesto), bailing him out of jail after one of Jonson’s plays offends someone. Edward offers to pay Ben to stage Edward’s plays with Ben’s name on them, but Ben’s ego is such that he won’t do it. However, actor Will Shakespeare (Rafe Spall) is only too happy to take the credit, to say nothing of the money, fame and adulation that come with it. Then De Vere gets the idea to use his plays to influence the succession to the English throne as the now-older Queen Elizabeth (Vanessa Redgrave) does not have a legitimate heir. This doesn’t work out quite as De Vere hopes, politically or personally.

There are so many different impulses running through ANONYMOUS that they collectively wind up choking each other to some extent. Yes, HAMLET does have that “conscience of the king” element where the prince uses theatre to try to uncover Claudius’ guilt, but it still seems quite a leap for Edward to suppose that one of his scripts will produce an immediate result (or that the royals will care what the groundlings think). Then there is the issue of who is related to whom. Fair enough to suppose that De Vere and Elizabeth were more than loyal subject and monarch – ANONYMOUS is far from the first film to suggest that the term “Virgin Queen” was not to be taken literally – but some of its other notions are farfetched even by the standards of melodrama. A climactic revelation goes right over the edge of suspension of disbelief, turning potential tragedy into sheer overkill. It’s also hard to accept that in the universe of the film that anyone would be able to keep information from Her Majesty when she wants to know something.

On the plus side, Ifans gives a supple performance, suggesting a dreamer’s mind without becoming oversensitive or overwrought. Redgrave can do pretty much anything with conviction, and here she is both as regal and as human as can be. Casting Redgrave’s real-life daughter Richardson as the queen’s younger self is a stroke of genius, as Richardson is a wonderful match in both appearance and attitude. Thewlis shrewdly gives Cecil some kindness to line his harsh behavior and Spall earns honest laughs as the enthusiastic, opportunistic impostor.

ANONYMOUS is handsomely made, with lush costumes and a slight sepia tone to Anna J. Foerster’s cinematography that’s in keeping with the look of older films made of Shakespeare’s plays.

Director Emmerich is treading some new ground here in terms of genre, as he’s better known for fare like 2012 and INDEPENDENCE DAY. He shows restraint in terms of spectacle and in handling the actors; we don’t feel that we’re being battered by visuals for their own sake and the performers all seem on the same wavelength. However, we’re bouncing between so many characters with so many different agendas that we aren’t given time to develop much stake in any outcome. We see De Vere watching his works performed, but we never know if he’s happy or disappointed with the results. (For a writer who is paying his producer and director, he’s got remarkably little to say about the interpretation of his words.) We don’t know enough about Jonson to empathize with him and if viewers have any notion of what’s at stake with the succession, it won’t come from what’s shown in the film. We don’t even see what inspires De Vere to keep writing after some events that seem like they should have overwhelmed him completely. Then there are some interpretations of historical events that are so unlikely that, while done perfectly seriously, approach the dimensions of a Monty Python sketch.

ANONYMOUS moves along briskly, has a first-rate cast and is pretty diverting. It just isn’t remotely convincing when it comes to getting us to wonder if any history, theatrical or familial, might have happened the way it’s shown here.