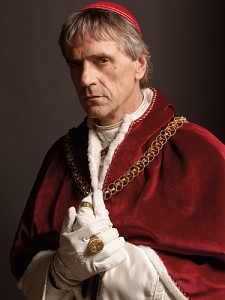 Showtime’s THE BORGIAS, airing Sunday nights at 10 PM, concerns the fifteenth-century reign of Pope Alexander VI, aka Rodrigo Borgia (Jeremy Irons), whose family name has become through the centuries a synonym for murder and treachery. The first season runs as a ten-episode miniseries and it has already been picked up for a second season.

Filmmaker Neil Jordan, who has directed, written and/or produced such films as THE CRYING GAME, INTERVIEW WITH THE VAMPIRE and MICHAEL COLLINS, makes his first foray into series television as the creator of THE BORGIAS. He also serves as an executive producer, writer and some times director on the show. In this interview, he talks about what attracted him to the subject and gives a direct response to that almost never-answered-in-showbiz question: how much it all cost.

ASSIGNMENT X: How did you come to write about the Borgias?

NEIL JORDAN: I found something fascinating about this family, about what they had to do to attain power, and just actually the hugeness of the characters. Within one family, you have Rodrigo Borgia, you have Lucretia Borgia, you have Cesare – they’re of huge stature, in my mind.

AX: Are there any parallels in how the Church operated back in 1492 to anything that is happening in the present?

JORDAN: Oh, no, no, no. What we see in this series is perhaps the reason for the Reformation. The current Church scandals have nothing to do with this.

AX: But do you think that the manner in which religion is presented to people, then and now, has anything to do with the way power was acquired in the Church?

JORDAN: Nobody can start a war without appealing to some god. Almost nobody. And I just think religion, and power, and politics, go hand in hand. One is a mask for the other. And it amazes me in a strange way how little the world has changed from the [Borgia era] era to the present day. Tony Blair could not invade Iraq without an appeal to God, you know? And I think religion is the thing that will always be there, because people have this strange need for certainty, and nothing can destroy it for them.

JORDAN: [laughs] The Pope goes mad for an evening – he has a spell of madness.

AX: Where did you film THE BORGIAS?

JORDAN: We shot in the Korda Studios. It’s four wonderful stages, just about an hour outside of Budapest. There is another set of studios that have been set up recently. It’s a wonderful place to work.

AX: With all the show business budget-tightening going on, were you surprised to be able to make a show as epic in both story and visual terms  as THE BORGIAS?

JORDAN: Yeah, I was amazed. I mean, I tried for nine years to get it going as a movie. When Showtime said, “Make this,” I just thought I was very lucky. I think it’s a fabulous idea long-form, really. Even with MICHAEL COLLINS, which was a huge historical idea shoved into a two-and-a-half hour movie, you kind of can’t do justice to the history within a movie format and the minute I began to write these scripts and expand the movie script I’d written, I suddenly thought, “This makes much more sense for this [format] than a motion picture.”

AX: Can you say what the budget was for the first season?

JORDAN: Forty million dollars. It was amazing what we were able to do. CGI, if you plan things carefully, you can do things of that scale. Forty [million] for the whole ten episodes, four or five per episode. We had quite a bit of money. It’s shared between [Showtime and] Canada and Hungary and Ireland. I think there are various tax structures in Europe to enable things like this to happen. There are different countries in there.

AX: Is this the longest you’ve spent on one project so far?

JORDAN: Yes, it is. I mean, I’ve spent years trying to get movies made, but in terms of continuous periods of shooting, yes, it is.

AX: To do a project over this length of time – did you ever get bored with it, did your passion for it increase?

AX: How was doing a ten-hour miniseries compared to doing a shorter project?

AX: THE BORGIAS is already renewed for a second season and you’re signed to be hands-on as director for at least two episodes. How long are you going to be this close to the series? Are you going to be writing and directing as long as it goes?

JORDAN: I hope so, but you know, I also make movies. I haven’t made one since I started this, because it was so fascinating and I just wanted to make this right, but I know I will keep writing them and I will direct episodes, but I can’t do them all.