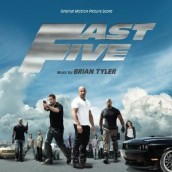 Brian Tyler has the need for speed like never before

If there’s a composer whose street rep is of the brash, Young Turk, then it would be Brian Tyler. Possessed of movie star looks and an ability to incorporate a rock-pop rhythm into even his most orchestral film scores, Tyler is more than a double-threat when it comes to seemingly scoring every major youth-action picture out there, the kind of plum-buck assignments most composers with a grey hair can’t seem to get arrested for nowadays.

Even if they might feel like screaming as he hot rods it past them in the Hollywood popularity race, the fact is that Brian Tyler’s got the goods, especially since his thematically melodic music bursts with the geek love of a guy who obviously spent a good portion of his youth when the summer multiplex was at its creative prime. Tyler’s talent saw him explode from such clever indie scores as SIX STRING SAMURAI and BUBBA HO-TEP to embody a bombastically fun sound with work like DRAGONBALL, THE EXPENDABLES and EAGLE EYE (while also managing some positively fuddy-duddy old school scores like THE FINAL CUT and THE GREATEST GAME EVER PLAYED). If you were in a teen-packed theater where a combo of strings, samples and percussion was doing battle like Rambo with relentless, rhythmic builds, chances are that music belonged to Brian Tyler. It’s an undeniably thrilling sound he now truly owns the pink slip on with FAST FIVE.

For what’s likely the best movie ever to be accompanied by that numeral, let alone a successful franchise to have its best entry this far down the road, FAST FIVE also marks Brian Tyler’s third score for a series that’s also seen Brian Transeau and David Arnold behind the composing wheel.

Yet Tyler was certainly no rookie when he took on FURIOUS’ third race with TOKYO DRIFT, especially after having done the gung-ho score for ANNAPOLIS with DRIFT director Justin Lin.Not only did their partnership produce a film memorable enough to jump-start the FAST saga out of direct-to-video lameness, but TOKYO would arguably be the movie that truly propelled Tyler into the mega-music stratosphere- not only with further driving Oriental action in WAR and RAMBO, but also with the more-is-more excitement of THE FINAL DESTINATION, ALIEN VERSUS PREDATOR: REQUIEM and the aforementioned BATTLE: LA (yet while still managing to get stylish, subtly impactful scores in there like MIDDLE MEN, COLUMBUS CIRCLE and THE LAZARUS EFFECT).

If Tyler’s work left one catching their breath, FAST FIVE’s journey to Rio de Janeiro enters the Himalayan Death Zone of exhilaration, an impact made even more unexpected given the running-on-fumes familiarity that impacted just about everything other than the music of the last FAST & FURIOUS. The highball that’s been mainlined for FIVE resounds with a pit crew knowing they have to step up their game, or else. The result is a movie made for fans, let alone everyone else, a film that practically re-invents every make before it while cannily tying itself in as a prequel, filled with even the most delightfully obscure links to the other four FAST flicks. FIVE satisfies on just about every level, especially in the music that not only has to play the races we’ve come to know and love, but also hit the franchise’s new direction into caper film territory.

Thankfully, Tyler’s made the decision to amp up the FURIOUS sound he’s established as opposed to re-inventing the wheel. While set in Brazil, there’s curiously less of an “ethnic” sound to this vehicle than the galvanizing Oriental percussion he gave to DRIFT. With the most overt Latin rhythms showing up in the tender, character-building guitar riffs of “Christo Redentor” and “Paradise,” Tyler’s Latin beat is mostly about its attitude as opposed to the obvious, a wise, mostly non-specific musical decision that prevents this from being what could’ve been the twelfth million rip on John Powell’s ITALIAN JOB.

Like someone building a mean machine out of age-old instruments, Tyler sublimates the Brazilian sound into industrial percussion (“Surveillance Montage”), turns it into a Stomp-worthy dance of hellzapopin’ junkyard debris (“Convergence”) and dares to do a comedic tango (“Cheeky Bits”). Instruments like the charango, surdo and berimbau get processed into a cool, mutated percussion. Even the action stuff feels like some Brazilian dance-cum-bullfight, with Tyler as the toreador, barely dodging the oncoming metal beasts with a spring to his step.

Tyler’s music has always had a terrific, youthful enthusiasm to it, no more so than for a steel-filled movie that’s loaded with hot young flesh and well-oiled biceps, FAST FIVE’s score often plays like a destructive rave, its scratch rap electronica (“Remote Control Intel”), voice beats (“Tapping In”) and hip-hop vibrancy (“What Time Do They Open?) the equivalent of a hot night of pumped kids about to do something illegal on the asphalt dance floor. These cues are also another way of playing the bank robbing caper element as something different from the usual, multi-generation suspects that have kept the vibes of CONFIDENCE and any of the OCEANS movies going ad infinitum. It’s planning for the big rip-off that’s also fun without being jazz retro for characters who don’t have the time to be hip, even if FAST FIVE ingeniously positions them as a car racing rat pack that likes to beat the shit out of each other every once in a while. Tyler’s attitude here is all about a team trying to out bad-ass the other, the score giving a mean strut to The Rock’s no-nonsense Fed in “Hobbs Arrives” and most effectively pounding in the body blows with Diesel for “Dom Vs. Hobbs.” FIVE’s beat knows just how f’in cool this all is, and earns the bravado with style, and not just a small bit of surprising emotion on top of the neat posturing.

When it comes down to it, FAST FIVE is all about Tyler’s relentless gift for chase music. If one guy’s career can be based on “Bishop’s Countdown” (the mother of all crescendo ramp-up cues that James Horner did for ALIENS), then it’s Tyler. But where Horner is about elegance, Tyler captures this kind of motion with skateboarder brashness.

FAST FIVE essentially has two jaw-dropping demolition derby scenes in “Train Heist” and “The Vault Heist,” not to mention numerous other bits of kinetic business in such selections as “Bus Busting” and “Enemy of My Enemy.” Tyler’s trick into making each action vamp as propulsively fresh as it is interesting is to latch onto a theme and then drive it into the ground, escalating it over and over again with full orchestra and a plethora of electronic rhythms, each weaving out of the other though a series of mini musical explosions that lead to the big bang. What makes the sheer relentlessness of these cues much more than busy noise is that Tyler’s old-school enough to give each chase a melodic, and emotional through line that peaks with the big musical O. Tyler’s truly furious energy here takes no prisoners, barreling through effects and dialogue with such constant, smart motion that every bit of physicality gets hit, which is no small accident.

Seeing people at the jacked screening I attended tapping their feet and swaying to Tyler’s beat might actually be a first for me. You’re not only attending a cool as hell movie with FAST FIVE, but Tyler gives it the energy of a rock concert. Not dumb metalhead stuff, but an orchestral-electro dance jam that’s determined to be movie music, almost in spite what a lesser sequel would have asked for a composer who’d go through the motion.

And if this movie didn’t make you want to step on the gas immediately, the Varese score album does the job just as nicely. Tyler’s a soundtrack fan enough to pack a shitload of coolness into his albums, and FAST FIVE tops out at a near CD-busting 78 minutes, with the music sequenced for listening pleasure- not to mention urging on a potential chase with the cops. As fun as it is dangerous, FAST FIVE confirms Tyler as the coolest speed freak in the multiplex.