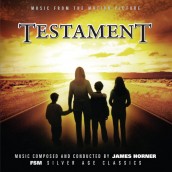 Film Score Monthly releases another early, auspicious score by Horner centered on youth. 1983’s TESTAMENT remains one of the saddest films the composer would score, its devastating emotional impact heightened by playing the end of the world with a near-chamber music approach.

A latter-day ON THE BEACH, TESTAMENT has a family learning about a nearby atomic war, avoiding immediate devastation only to perish from the effects of radiation poisoning. Somehow, Horner hears Armageddon as a gentle Americana lullabye, his bells, flute, piano and angelic female voices making for simple, deeply affecting melodies that hush the little ones to ultimate peace.

With horns providing TESTAMENT with it elegy to humankind, the score’s muted, but tearful effect showed Horner as a composer as capable of gigantic space operas as he was the most delicate intimacy, a talent that’s continued to serve him well on such equally heart-rending, small-scale works as THE BOY IN THE STRIPED PAJAMAS.

For a relatively brief score that truly didn’t need more music, TESTAMENT’s long-awaited CD is filled out with the Mozart pieces that the film’s nuclear family play as a reminder of more pleasant, civilized times. Duck and cover, then break out the handkerchiefs when listening.