The actress talks her Showtime comedy, DRIVE and PTERODACTYL

In the Showtime series EPISODES, which has its first-season finale tonight, two British television writers, played by Stephen Mangan and Tamsin Greig, come to Hollywood to oversee the American version of their hit English series. To say they experience culture shock is putting it mildly.

Their British boarding school is turned into a sports team and their erudite main character is recast as Matt LeBlanc (playing himself playing the TV character).

Mircea Monroe plays LeBlanc’s costar Morning Randolph, an actress in her late forties who has had so much work done that she looks like the youthful Monroe. 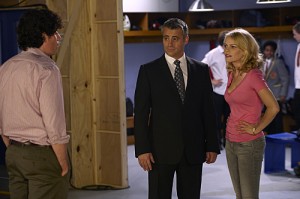 AX: How would you describe EPISODES?

MIRCEA MONROE: It’s a show within a half-hour show about the entertainment business. It’s obviously a comedy, but also has wonderful heart.

MONROE: [She is] an actress who’s on the show within the show.  She’s an established actress. She’s famous in that world, she’s done very, very well, has a lot of respect or whatever, so she’s worked into her late forties, so [that is reflected in] her demeanor and confidence.  She’s really, really smart, knows how to play the game, maybe comes off a little naïve or dumb, but that’s all intentional, because she’s been around the block.

AX: Do you play the scenes in the show within the show differently than you’d play those scenes if you were just doing them in a regular sitcom?

MONROE: [In scenes where Morning is being herself], obviously, I did my real work, and then the show within the show is such a little bit, but I still acted in a sitcom, just like I would if I was [really in one]. I didn’t try to be bad or anything like that. If it comes out bad– then it was intentional [laughs].

AX: Were you given any particular direction on how to play Morning?

MONROE: I think the most frequent reminder is the fact that she’s supposed to be in her late forties, so just to remember that. I did a journal entry as my character and all that kind of stuff to get in her head space, but that was probably the most frequent note. If I’m talking to Matt, obviously, he’s older than me in real life, but on the show, he’s much younger than me, so to speak to him as if he’s younger, as if I know more than him, I’ve been around more – essentially, to be the kind of person I want to be, confident and successful.

AX: Do you wear any special makeup in EPISODES to reflect the fact that Morning has had a lot of work done so that she looks like she’s your real age?

MONROE: No, everything is normal. It’s just implied. There’s no prosthetics. It’s just me. 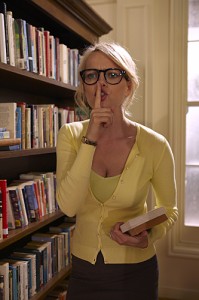 AX: So she hasn’t frozen her face?

MONROE: No, all the expression is okay. She can still speak and laugh.

AX: A few years ago, you were a regular on the short-lived series DRIVE …

MONROE: Yes, yes, yes. It was amazing. [Fellow DRIVE star] Nathan Fillion and I are actually great, great friends. He just fixed my car. He knows how to wipe out scratches on cars, so I took my car over there and he bumped out the dents. It’s hot that any man can do something like that, and he’s amazing. But that [DRIVE] experience – not only the friendship with him, but it was wonderful, it was just really short-lived. Which is why this show [EPISODES] is so funny to me, because it’s so much of what that experience was for me in a lot of ways.

MONROE: I’ve done maybe seven horror movies, so that world has been great to me. The fans are crazy-devoted. They’re really wonderful and it’s paid my rent for a long time.

AX: How many different ways have you died onscreen?

MONROE: Gosh. I’ve had my throat slit, I’ve had my boobs cut off, my eyes cut out, I’ve fallen off a cliff. My favorite is getting my arm ripped off by a pterodactyl – yes, you heard me right – in PTERODACTYL, number one movie on the Syfy Channel. It was my first movie ever – I was like eighteen.

MONROE: Yeah, nothing, exactly. It was all CGI. Well, they did have a head that would like come down and nip at you, like a real – well, not real, but like a [puppet].

AX: Is it nice to work with real people instead of pterodactyl heads?

MONROE: Oh, it’s wonderful [laughs]. Even on DRIVE, it was all CGI. Everything’s fake. So this is amazing. It’s humans and contact. No blood, no mess.

AX: Do you do any screaming?

MONROE: Do I scream in this? No, I never do.

MONROE: I actually make jewelry right now. It’s like a locket, but instead it’s got glass over it, so it’s like a picture frame, so you can get it personalized. So you can get your kids or your dog or whatever, and you can’t take it out. It’s sealed. It’s like a frame, like a locket, but open, but sealed. We’re just starting our website. We’re just giving it away to fans right now. [The company is called] Adriana Monroe. It’s the girl I did it with and myself.

AX: EPISODES creators David Crane and Jeffrey Klank came from FRIENDS and MAD ABOUT YOU, respectively, and of course your leading man MATT LeBLANC was a lead on FRIENDS. Were you a fan of either of those series before you began working on EPISODES?

MONROE: Oh, definitely. Both. I think they’re two of the best shows in the history of television, so to work with David and Jeffrey and Matt is a dream.