Home » In Remembrance: The 10 Best Scores of Composer John Barry 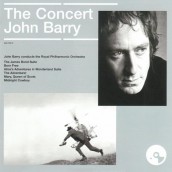 In Remembrance: The 10 Best Scores of Composer John Barry

If the theme’s the thing in film scoring, then the passing of  composer John Barry Sunday at age 77  represents the true end of unabashed, symphonic lyricism. There were few composers who had his way with melody. Even the most explosive action of Barry’s Bond scores had a slow, hypnotically seductive rhythm.

It was a lyricism that made generations fall in love, not only with their dates in the darkened theater, but with the lush possibility of film music itself. And that was just fine for Barry, who like so many of us, spent the better part of his youth in a movie theater.

Barry could translate that flickering spell with music that didn’t so much dance as it did swoon. It went far beyond the movie screen, becoming the music of innumerable weddings, as well as wakes. And now, no doubt, there are thousands of fans playing their favorite Barry cues from his dozens of immediately distinguishable scores. For Barry had a voice, one that never failed to be bold, and flat-out beautiful no matter the stylistic circumstances. He’d keep stating a theme, and make it new with each variation.

Movie scores were far the poorer when so many great composers of Barry’s ilk went out of style, as the technology and Hollywood tastes got “hipper.” Perhaps even more tragic is that many of those musicians from Barry’s generation are as are vibrant as ever, yet still left in the dust of arguable progress. For when it all comes down to it, you’ve got to have melody.

John Barry was the thematic personification of it. and a driving force, along with such dearly missed maestros as Jerry Goldsmith and Elmer Bernstein, a big reasons of why I fell in love with the art form, and still love it for all of the permutations that inspire our own inner flights of fantasy.

So in alphabetic order, and reduced to the cliché of a ten best list (as if there weren’t too many to count when it came to John Barry), here are the scores the composer’s scores that likely got the most play as my scratchy vinyl evolved to CD and the net. Seek out these treasures, and hear the magic that was uniquely John Barry’s, loud and beautifully clear.

Barry’s lovely, whimsical score remains the best ALICE music any composer has conjured, from the delightful Carroll-ian wordplay of his songs to the haunting lyricism of a girl growing into womanhood in wonderland.

Incorporating the legendary auteur’s own song “Smile” into his score, Barry’s deeply emotional, Oscar-nominated score paints a tragic-comedy portrait of a movie clown crying on the inside


Barry’s Oscar-winning music paints the Kevin Costner directed epic, proud grandeur of the old west, along with the tenderness of a man trying to bridge cultures with its far more soulful inhabitants.

Barry has a blast with this lush, laid-back Bond score from the Connery era 007, that’s equal part Vegas swagger and Blofeld danger

THE KNACK AND HOW TO GET IT

Barry got his start in the English rock scene, and no score better captures his hep, with-it jazz chops than his bouncy comedy stylings for a lad on the lady prowl

THE LION IN THE WINTER

The mean, sad streets of late 60’s NYC gets a haunting harmonica solo, with Barry’s orchestra strutting like a western hero gone to seed, complete with ironic sci-fi danger music for a grindhouse rendezvous

More haunting late 60’s jazz disaffection, courtesy Barry’s melancholy grooves that reflect the hollowness of its characters for all of their mod, free love affectations

Barry provides more beautifully eerie music for the great outdoors, in this case the savage lyricism of the Australian outback, where his music provides a poetic counterpoint to the life and death consequence of its young, not-so innocent characters

YOU ONLY LIVE TWICE

Tags: John Barry, alice's adventures in wonderland, chaplin, composer, dances with wolves, diamonds are forever, in remembrance, midnight cowboy, petulia, the knack and how to get it, the lion in the winter, walkabout, you only live twice