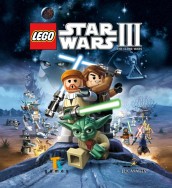 One of the greatest contributions to the STAR WARS franchise was the creation of the LEGO STAR WARS video games.

Taking the entire six films and re-creating the environments and storylines in a kid-friendly LEGO world was absolutely a work of genius. Addictive game play and a really heightened sense of the worlds George Lucas created made this one of the best video games of the last decade.

The LEGO video game worlds have advanced with INDIANA JONES and HARRY POTTER making gigantic improvements year after year and many of those are included in CLONE WARS III. Also, the work LucasArts has put into THE FORCE UNLEASHED and its BATTLEFRONT games is also utilized in this latest installment as well (there are more force powers and there are even large scale battlefield levels).

Home base for THE CLONE WARS is a ship where you travel through various planets searching for baddies General Grievous, Count Dooku and Asajj Ventress. This hub is very cool and the planets intertwine as you dig deeper into the game.

THE CLONE WARS takes place in between ATTACK OF THE CLONES and REVENGE OF THE SITH, so in this game, the Clone Troopers are the good guys. They also have very distinct personalities and special skill sets (some have bombs, others have specialty guns and even one has the ability to radio other clone Troopers to copy his movements and actions).

The Jedi characters also get some upgrades too. I really liked the ability to use the light saber to cut through pre-ordained holes in walls as well as the ability to throw your light saber at specific objects. And there’s an unlockable extra where you can become “glow in the dark” which helps in some of the darker areas of the game.

The ability to have two players veer off and move ahead or backwards in an environment is also a welcome addition that started with the INDIANA JONES/HARRY POTTER LEGO incarnations.

There’s also another really cool feature where two players actually engage in two separate missions within a level before hooking up with each other. It’s a really neat idea and brings added fun to the game.

That said, the last Count Dooku level is actually pretty spooky and scary even for a STAR WARS game (you travel underground in the darkness as creatures pop out of the walls) and some of the battlefield levels do take some time to get used to.

The ability to create your own battles is also another wonderful special feature and there’s additional game play in finding the unlockable characters that you can buy throughout.

LEGO STAR WARS III: THE CLONE WARS is a welcome addition to the franchise. While the stories and adventures might not be familiar to those who simply prefer the six films, getting to live out new adventures with familiar characters still provides hours of new fun. STAR WARS was the first to get the LEGO treatment, and frankly, it’s still the best hands down.