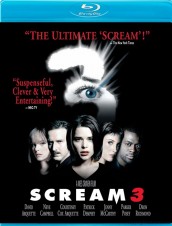 A very lazy film (when you compare it to the ambitions screenwriter Kevin Williamson and Wes Craven were going for in SCREAM 2), SCREAM 3 is a hodge podge of unfunny comedy, crazy back story and very few actual scares.

Williamson is nowhere near this film (he supposedly provided the “story”) and instead is replaced by scribe Ehren Kruger. He’s a strong screenwriter in his own right (he later scripted the superb THE RING American remake), but he has a hard time wrapping himself around the various divergent tones of SCREAM 3 which makes for a very choppy and uneven film.

The movie continues to saga of Sidney Prescott (Neve Campbell) who has found a way to go into hiding in the middle of nowhere to get away from all the crazy psychopaths that want to kill her.

Meanwhile, in Hollywood, production has begun on STAB 3 (the fictitious movie franchise within SCREAM that’s based on the Woodsboro murders chronicled in the first film) and people working on that movie begin dropping dead – and they aren’t acting.

A pre-GREY’S ANATOMY Patrick Dempsey shows up as Detective Mark Kincaid who tries to get to the bottom of the mystery – which is all leading to the killer trying to locate where Sidney is.

Returning to the franchise are the film’s unlikely romantic duo Dewey (David Arquette) who is now a consultant on the STAB franchise and ambitious reporter Gale Weathers (Courteney Cox). When the film begins, their relationship is on the rocks as Dewey has moved on to actress Jennifer Jolie who is playing Gale Weathers in the STAB films, while Gale has moved on to being a tabloid TV host.

The problems with SCREAM 3 are numerous. Posey (who is usually very good) is way too shrill and annoying and remains alive way too long in the movie. The gags at the movie studio feel forced. Jay and Silent Bob from Kevin Smith’s films CLERKS, MALLRATS and others make a cameo as does Carrie Fisher in a totally ridiculous throwaway scene (it exists solely for a Princess Leia reference).

The reveal of the killer is also pretty ridiculous (but so was the reveal in SCREAM 2, but the rest of the movie was good, so the ending was forgiven). And the twist that the killer has found a way to emulate anyone’s voice is far-fetched even for the SCREAM franchise.

The only breath of fresh air in the entire film is the return of Randy (Jamie Kennedy) who died in the second film. His pre-death videotape explanation of the “third film in a movie series” is excellent and really saves an otherwise uneven mess. I still feel like Craven and Williamson will forever regret killing him off in SCREAM 2.

The Blu-ray release features a nice High-Definition transfer. It looks really good (much like the recent releases of SCREAM and SCREAM 2).

The deleted scenes don’t add up to much and I really couldn’t find the differences in the alternate ending. And why no current special features? Couldn’t they find something new to add to the mix?

Like many sequels in a franchise, if you love the series, you’re going to want to own it. While SCREAM 3 isn’t the best horror movie (but still the worst in this franchise), it still has a few charms (namely the returning cast). Hopefully SCRE4M will right the wrongs of this installment, because 11 years later, and this is the one film out of the first three, that severely dates itself. Time hasn’t been kind, but that’s why it’s the perfect time for a reboot/sequel.