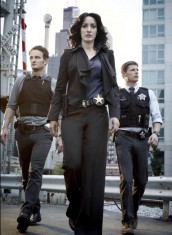 While speaking at today’s Winter TCA tour in Pasadena, CA, Fox’s THE CHICAGO CODE creator and executive producer Shawn Ryan reveals that the original concept of the show changed dramatically from when the pilot was picked up.

“I wanted it to be about more than police officers,” he admits. “It became much more than I originally intended.”

The original concept revolved around police officers on ridealongs, and through further development it became a multi-layered story about cops who are fighting crime and corruption in the city of Chicago. This also resulted in the re-titling of the series from RIDEALONG to THE CHICAGO CODE. This was based on his experience on the recently canceled FX series TERRIERS, since the title of that series was viewed as one of the many reasons why viewers didn’t tune in.

“It was certainly something based on the experience on TERRIERS, where the title may have been an obstacle to get people to come, that turned out to be a lesson,” says Ryan. “It made me reevaluate the title. ‘Is this the title we want?’ I realized this show had more than riding along with police officers. It became about a code between people and these politicians – their mistrust. It did lead to the title change that I’m very happy with.”

CLICK HERE for AX’s review of THE CHICAGO CODE pilot