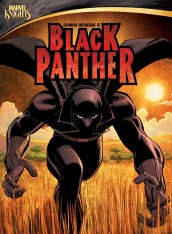 Since he was a child, writer-director Reginald Hudlin (HOUSE PARTY, BOOMERANG) has been a fan of Marvel’s BLACK PANTHER comic book.

In fact, for the last two decades, he’s been attached in one way or another to aborted feature film adaptations of the character. In 2005, he rebooted the character in Marvel’s comic book pages (with legendary artist John Romita, Jr.) which was subsequently turned into a six-episode animated series based on the first comic arc “Who Is Black Panther?”

With Shout! Factory releasing the DVD this week that compiles all six episodes (with special features), BLACK PANTHER is back. In fact, Marvel just announced writer Mark Bailey has been handed the task of tackling the character for a feature film for another theatrical go-around, so it’s a renaissance for Marvel’s breakthrough Africa-American superhero.

The story takes place in Africa where the Wakanda civilization has thrived due to a family of warrior-kings that have super speed, strength and agility. Currently in line for the throne is young King T’Challa who is also known as the Black Panther and must protect his land and family from the villainous Klaw.

Hudlin (who also served as the head of the BET network where the TV series was initially developed) spoke with ASSIGNMENT X in this exclusive interview about his love of the character, writing for the comic and the new BLACK PANTHER DVD. 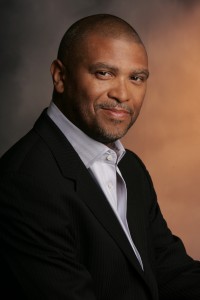 ASSIGNMENT X: How difficult was it to bring the comic book to animated life?

REGINALD HUDLIN: We started developing it as a series and it took awhile. Even though we did this as flash animation, we wanted the look of the series to look like the panels of the comic book. We wanted to be true to John Romita Jr.’s art, but to have way more animation than most flash animation. We did a lot of experimentation and got it to where we wanted it to be. Then I decided to leave the BET network and it took awhile to work it out for me to formally come on board as a producer on the project, which was natural because I writing the scripts based on my book, casting it and directing the voices and so on. We did the series and by the time we finished it, the network had decided to go in a different direction and wanted to appeal to a demographic that was older and female. I loved the show, Marvel loved the show, so we kept going.

HUDLIN: Marvel sold it to a lot of territories around the world who were all enthusiastic about it and BET had domestic rights, but decided not to exercise them.

AX: Is this the full series on DVD?

HUDLIN: The original template was, we were going to take the first six issues of the comic book and turn it into an animated series which is what we did. In turning those six issues into a comic book and into a series, we actually had more time in a lot of cases. I was able to add additional scenes that weren’t in the book. I added a whole storyline with Storm, who doesn’t appear in the original series. We felt, “look we can do it, let’s do it.” It’s the original series, plus.

AX: How old were you when you first discovered BLACK PANTHER?

HUDLIN: I saw it when I was a kid. My older brother was an avid collector and I remember when he brought the book home. I read the book and thought it was the coolest thing ever. I was a fan of the book from its original incarnation.

AX: What appealed to you about Black Panther?

HUDLIN: We were the kind of house that had Fred Hampton posters on the wall who was one of martyrs of the Black Panther party [no relation to the comics] and was assassinated by a bunch of Chicago cops around that same time period. We were a very political household. What I loved about the Black Panther character was the seamless blending of politics, the action and the inspirational, aspirational aspects. I would always marvel about Superman. The first superhero is such a brilliant idea. It was the first one and they got everything right and I look at the Black Panther the same way. He’s the first black superhero and they go everything right. 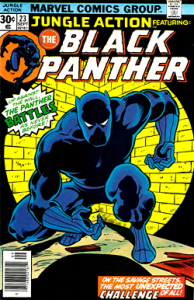 AX: Stan Lee, who created the character with Jack Kirby, is part of the voice cast of the new DVD – it must have been cool to get him to be part of this process.

HUDLIN: I’m a huge fan of Stan. Stan and Jack Kirby are the equivalent of Paul McCartney and John Lennon – they’re both pairs of creators that in a ten-year period changed pop culture. Before Black Panther, you look at characters like Gabe Jones and the Howling Commandos, and Robbie Robertson and the cast of SPIDER-MAN. Stan instinctively put black characters that were human beings into comic books in a way that was revolutionary and he just did it in a matter-of-fact way. That speaks to who he was as a man.

AX: As you got older did you grow out of the character?

HUDLIN: I always liked the character, but I was often frustrated with his depiction. I thought, “Why is he being treated as a second banana? Why isn’t he kicking more butt? Why isn’t he being treated like Captain America?” I thought Black Panther and Captain America were equivalent characters and they should be depicted in the same way. He got beat up too much. He was not pivotal enough in storylines. I just felt they needed me – a black writer who understood these characters. That was always my dream and fantasy. I never thought it would come true and when it did, I thought “wow, I can’t believe I’m doing this.”

AX: So you ended up writing the comic for four years?

HUDLIN: Originally it was supposed to be a six-issue mini-series. I turned in those six issues and they said, “if you kept going, what would you do?” I said, “this that and another” and they said, “why don’t you keep going.”

AX: Was it a new tact to learn how to write for comics versus working in TV and film?

HUDLIN: Obviously there is a lot of overlap between the two medium and with each new medium, you learn unique things that teach you not only about that platform, but it informs you about the other mediums as well. Doing a movie is different from doing a TV series, which is different from doing a commercial. I’ve done all of them and in doing all of them, it makes me better at all of them. The same way in a TV show, where you want people to keep watching through the act breaks and the commercials, with a comic book, you just want to keep turning to the next page. It becomes, “how can I entice you to keep going?”  Artists are the directors in comic books. I would write a visual, but I wouldn’t overwrite the visuals. The ones I liked from sample scripts were pretty spare, and when you’re working with a guy like John Romita Jr., you’re not going to overload him – you let John do his thing. Learning to make the most of an artist took awhile. I didn’t do a double page spread until issue four or five where I had the Rhino running through the house. I was like, “I should have done that every issue. I should have released John Romita more.”

AX: You were probably the hippest President of any network. Not only were you running a network, you were writing a comic book at the same time. 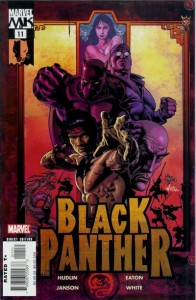 AX: The DVD has a great voice cast.

HUDLIN: The easiest portion was putting together the voice cast. Djimon Hounsou was an obvious idea. He’s African, he’s an Academy Award nominated actor and he looks like a superhero and when I called him, he was very aware of the Black Panther series and was on board. Alfre Woodard was a good friend of mine and we’ve wanted to work with each other years. She was on board. Kerry Washington was a friend of mine and got on board. Jill Scott, who I was a fan of, when I asked her about playing Storm she interrupted me and said, “you know, when I was a kid, I made a list of things I wanted to do and one of them was to play Storm. I know very well who Storm is and I’m happy you called, but not surprised.” And I thought, “this is destiny.” She was part of an amazing cast. I feel so lucky.

AX: What was the goal for that first six-issues you wrote?

HUDLIN: When I would tell non-comic book fans that “I’m writing the BLACK PANTHER,” and they would go, “great, who is that?” I realized there hadn’t been a clean, succinct retelling of his original and who he is – a thing where I could give them the trade paperback and go, “if you don’t know who the Black Panther is, read this and you’ll know everything you I need to know.” That was my goal when I wrote it to appease the fans, but more importantly to be accessible to people who this may be their first comic book.

AX: I know Wesley Snipes has been trying to get the movie version made so long, why has it been so hard getting a live action movie made?

HUDLIN: I’ve been involved on and off with that thing for more than a decade. After I made my first movie HOUSE PARTY, I was getting offers from different studios and that was one of two movies I really wanted to do. I had an overall deal at TriStar. I went off to make BOOMERANG, and then went to Columbia afterwords to talk about BLACK PANTHER. I talked with Wesley and Wesley wanted Ridley Scott. I would read some of the scripts they had for the BLACK PANTHER and the scripts were horrible. [In one version the] BLACK PANTHER was a black American who lived in the projects, who had no idea about his heritage. That drove me crazy. I was offended by them and told them so. It’s been through so many different incarnations, many of them, unbelievably horrible. It’s taken way too long, certainly. That was the point of doing the comic books. I don’t know if they will ever make a BLACK PANTHER movie, I don’t know if I’ll ever be involved in the making of BLACK PANTHER movie, but if I write this comic book, then people will know what it should be. And I was fortunate enough to turn it into an animated series, and more people will see it and go, “this is what the Black Panther should be.”