The SyFy series' newest member chats about joining the cast 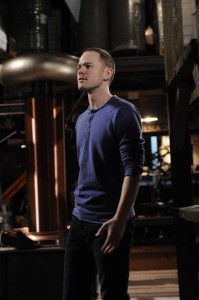 Aaron Ashmore is no stranger to genre television. A lot of fans of science fiction television will recognize him from his days on SMALLVILE, but now he’s got a whole new gig as an agent of WAREHOUSE 13. His character Steve Jinks joined this season, and is the Warehouse’s first openly gay character, which also has the uncanny ability to tell when a person is lying.

ASSIGNMENT X was lucky enough to get the chance to talk to Ashmore about joining the series, and chatted with him about the experience of joining a cast partway through the run of a show (since this isn’t his first rodeo). Ashmore paints a picture of an incredibly detailed work environment, and talks to the comedic strengths of his new co-stars.

ASSIGNMENT X: Talk to me about the beginnings of Jinks on WAREHOUSE 13?

AARON ASHMORE: Steve Jinks works at ATF and he gets recruited by Mrs. Frederick because she gets wind that he has the ability to tell when someone is lying. What a great ability! To have an agent that when you are tracking down artifacts and questioning people; he can say the person is lying and they know more than they are telling. That’s a really interesting aspect of his character. He came is as Pete’s new partner and Pete didn’t want a new partner. They’re very different guys. Pete wears his heart on his sleeve and Steve isn’t. He’s introspective, serious, and has a wall up around him. So Steve was thrown into this world and he has to make it work. It wasn’t the easiest for everyone to confide with each other at the beginning.

AX: How was it joining a cast that has already worked together for a couple of seasons?

ASHMORE: Luckily I have a little bit of experience with that [Laughs], for example SMALLVILLE. Coming into a very successful show in the middle of a run – it can be a little jarring. The idea of it is at least, just like SMALLVILLE, I came in and everybody was very welcoming and friendly. If I had any questions they told me not to hesitate to ask. Everyone was giving me phone numbers and telling me to call them if I needed them. Things like that make it an easy environment to hit the ground running. These people know their characters from seasons past and they know the tone of the show, so it is a little intimidating to jump in and be the new guy.

AX: How was working with all of the different artifacts?

ASHMORE: I don’t want to give away future spoilers, but I liked working with Ulysses S. Grant’s flask. I thought what happened with that episode to be pretty cool. But, what I’d really like is a Tesla. I want a Tesla gun of my own. I just want one. Everyone says, “Oh it’s just a tazer.” No it’s not. It looks like a ray gun, and it fires distances, so give me one of those! It’s fun working with all of the artifacts. The team that puts these things together and designs them does a really beautiful job. It’s so much fun to play around with all of this stuff.

AX: How far apart are the sets like Artie’s office and the parts of the Warehouse itself?

ASHMORE: It’s a big studio. There’s no HUGE Warehouse set; it’s a lot of smaller contained sections. But, even those are pretty big and detailed. If you look on all of the shelves artifacts have place cards written out as to what they are and what they do. I was amazed. When you’re shooting in those areas and you have time in between set ups, you start looking at all of these things and someone actually wrote all of that stuff down! Combs, cameras, all of it is labeled. Paintbrushes, everything! They (the sets) are kind of side by side. There are two kind of big studio spaces. Artie’s office is in one and the Warehouse is next to it. So it’s not really that big of a gap. It’s not hard to imagine the two being part of the same building when you are shooting.

AX: You and your brother Shawn have done a lot of genre work. Do you guys feel drawn to it at all or do you feel you get hired because you have genre experience and can work well with things like green screened monsters?

ASHMORE: I think it’s a little bit of both. Obviously we have both worked in the field so I feel that’s something recognizable for someone looking to cast you. They look at you and know you can handle directions like, “this thing is going to bounce off of here, light on fire and go out the window…can you follow that?” Well, you get that experience and then you know how to do it. [Laughs] Si Fi is such a huge genre and its big business now. For our age group it’s a really viable source of work and entertainment. Both Shawn and I were into Science Fiction and fantasy growing up so it’s not like it’s a real stretch. 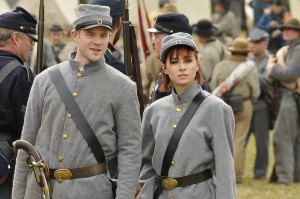 AX: Who have you been having the most fun with on set?

ASHMORE: Eddie (McClintock) is probably one of the nicest guys to work with. My favorite bands are like Tool and A Perfect Circle, and I was talking to Eddie and he said they were some of his favorites too, and they’re buddies of his. He toured with them and did artwork for some of their stuff. We had a lot of things in common so that was awesome.  Allison Scagliotti is an amazing actress and I work with her quite a bit. Saul (Rubinek) I haven’t gotten to work with as much but you learn lessons working with him because he’s so good and so professional and knows exactly what he wants. You get something different from everybody, but everybody has been cool.

AX: Seems like there is a wicked sense of humor to WAREHOUSE 13….does that translate off camera as well?

ASHMORE: For sure. Everybody is really quirky and funny. Eddie is the ringmaster. He is constantly cracking jokes the whole day. He’s always fooling around and joking around, which makes it a fun environment. Obviously the writers and producers are fun and funny so the majority of the time it’s just a laid back fun set. Some is always cracking a joke or making a fake fart noise in the corner and everyone is cracking up. [Laughs] It’s just a really great time.