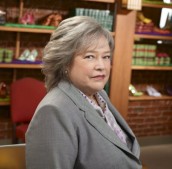 The actress talks about her new NBC series for producer David E. Kelley

Emmy Award-winning producer/writer David E. Kelley is famous for his comedy/dramas about lawyers, notably THE PRACTICE and BOSTON LEGAL. His latest offering in the genre, HARRY’S LAW, premiering tonight at 10 PM on NBC, stars Kathy Bates as Harriet “Harry” Korn.

The actress won an Oscar for her turn as an unhinged book lover in MISERY – she’s had roles as varied as the unsinkable Molly Brown in TITANIC to the U.S. Secretary of Defense in THE DAY THE EARTH STOOD STILL remake. Harry is a little more life-sized, a patent lawyer who has a near-death experience and decides to change her life around, opening a combination law firm/shoe store in a rundown neighborhood with clients whose needs come in all shapes, sizes and states of urgency.

Bates says the script won her over because of its description of Harry: “She had her feet up on the desk, she was smoking pot and watching Bugs Bunny.” She also likes how grumpy Harry is. “I come naturally to that, actually. Not to be flip, but I can be a naturally grumpy person.” She adds, joking, “Adjusting to the long hours on set helped that right along.”

In an exclusive interview at NBC’s party for the Television Critics Association, Bates expounds on her decision to take on a TV series lead. 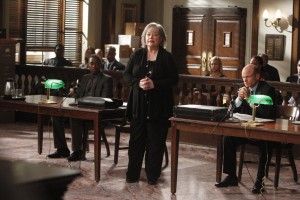 ASSIGNMENT X: Were you actively looking to do a television show, or did they approach you with the project?

KATHY BATES: No, they approached me. I was not looking to do a television show at all. That was the last thing on my mind, in fact. I was sent the script about a year ago.

AX: Although you’ve played other types of roles, MISERY made a strong impression on audiences and you more recently played the Red Queen in Syfy’s ALICE. As cranky as Harry is, she seems a little less extreme …

BATES: Yeah. I look at Harry as being a normal person. That’s one of the things I love about playing her. As my mother used to say, “Why do you have to play all these characters with afflictions?” Because I seem to play the crazy ones, the odd ones, and to me, Harry just seems totally normal. She just has lived a certain amount of years and she can only take so much from certain people and she doesn’t mind saying so. It’s all the things that David [Kelley] was saying about the character, that she doesn’t mind speaking her mind.

AX: Did you do any research into the law or being a lawyer for the role?

BATES: No. I love watching 48 HOURS and DATELINE NBC, those kinds of shows where I can see trials in progress, but that’s about as much research as I did.

BATES: No, not at all. I think he’s a wonderful foil for her, because he’s just exactly the kind of attorney that she is not, that she’s developed a grudging kind of admiration for. 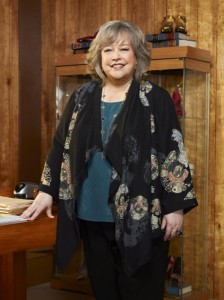 AX: Do you have input into Harry’s dialogue?

BATES: No. It comes directly from David. If there’s something that feels uncomfortable in the mouth that doesn’t feel natural, I’ll talk to him about it, or talk to [director/producer] Bill D’Elia and make changes, but we really have to say what David has written, no paraphrasing.

AX: You have a reputation among your fellow actors as a real trouper and a real leader, that you’ll go in there when you’ve got a 103 fever and still work.

BATES: Well, yes and no. I did come down with the flu in the middle of the season and so I did my best to stay online, but even I have to stay home some days when I’m not well. I feel very lucky to be playing this part and feel lucky for the opportunity.