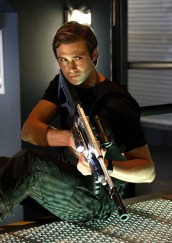 It  may be that I’m just lowering my standards, but in its third week, the fourth series of PRIMEVAL appears to be finding a better balance with its new characters and offering a bit more than just another monster runaround. Well, not much more, but if there is a reason to praise this episode it’s Alexander Siddig, who finally gets a chance to show why they made a good choice adding him to the cast. His suave villainy – not that he’s doing anything too villainous yet, but I’m expecting – in the first two episodes amounted to little more than a walk-on smirk, but this time around he helps to carry one of the two plot strands, and his DS9-trained acting chops are very welcome.

Philip Burton (Alexander Siddig) didn’t want Connor (Andrew-Lee Potts) back on the team, but now that Lester (Ben Miller) has reinstated him and Abby (Hannah Spearritt) anyway as of last week, Burton seems determined to weigh Connor down with busy work to keep him out of the field. Assigning Connor to run a security scan on the ARC, Burton has reason to regret his passive-aggressive ploy when an accidental reading on Rex puts the ARC in lockdown, with Burton trapped in a lab that is quickly running out of oxygen. Meanwhile, the rest of the team is chasing down arboreal raptors from another era while a mysterious woman (Ruth Bradley) that emerged from an anomaly draws Matt (Ciaran McMenamin) into making some very dangerous decisions.

PRIMEVAL has always relied on a catalog of references and – let’s be charitable – “homages” to other sci-fi shows and films (a trait it shares with SLIDERS, which I frequently think of when watching this series, and not to good effect). In this one I caught echoes of DREAMSCAPE in its admittedly very creepy Tree Creepers, one of the most satisfyingly unsettling monsters since the Future Predators. Their natural habitat has a WORLD OF WARCRAFT feel to it, but the most overt link to another series is in the episode’s use of an ornate theater as the bridge between times for this week’s anomaly. Any FRINGE fans in the audience?

The show has rarely dealt with human beings coming through the anomalies, that is apart from the regular cast. Maybe they’ve been trying to avoid too much unfavorable comparison with DOCTOR WHO, the series they were sort of designed to combat on behalf of ITV. There was one memorable episode with a knight, but this time around we have a party of savvy survivors that have evidently been time-hopping for a while. Lady Emily Merchant hails from 1840, and she might prove to be an intriguing new hero…or perhaps another Helen Cutter?

The episode does a nice job keeping up the pace with dual storylines, but it all comes crashing down when Connor’s last-minute gambit to “hack” into the ARC system and save the day uses a cheesy ploy that was old when WARGAMES was released. To top it off, we’re expected to believe that tech-head Connor uses a password with no non-letter characters and the computers display the passwords by default, like no actual computers tend to do. When is television going to catch up and show supposed computer “experts” actually using computers in a recognizable way? You don’t have to sacrifice that level of believability for the sake of fantasy storytelling.

And for those scoring at home, we now have multiple mystery story arcs, which may or may not be related. Gideon (Anton Lesser), as it happens, is dying, and he and Matt are concerned that a member of this team may be the cause of…something bad. Gideon may have known about this all his life, but who is it? Emily? One of our regulars? The evil Ethan (Jonathan Byrne), who will have to actually do something evil before I’ll simply take Emily’s word that I should care about being afraid of him? Or maybe even Matt himself? And when Burton thought he was dying, he almost told Connor about something called “Project New Dawn.” So is Burton the one Matt should be checking out? What is this project? Hopefully the writers have a few ideas.