Home » Exclusive Interview: Adrian Pasdar on THE LYING GAME, the end of HEROES and CASTLE 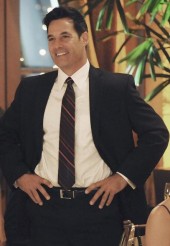 Exclusive Interview: Adrian Pasdar on THE LYING GAME, the end of HEROES and CASTLE

The actor talks about his new ABC Family series, plus advice from Walter Brennan 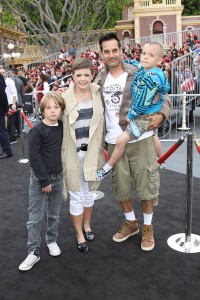 Adrian Pasdar, wife Natalie Maines and family at the World Premiere of PIRATES OF THE CARIBBEAN ON STRANGER TIDES | ©2011 Sue Schneider

ABC Family has a runaway hit with PRETTY LITTLE LIARS, the teen drama based on a series of books by Sara Shepard. Happily for all concerned, Shepard has another series of books about a different set of teens called THE LYING GAME, which airs Monday nights on ABC Family.

In THE LYING GAME, Alexandra Chando plays dual roles. Emma Becker is a good-hearted adolescent who has spent much of her life in foster homes. This changes when she is contacted by her identical twin Sudden Mercer, who was adopted long ago by the well-to-do couple Kristen (Helen Slater) and Ted (Andy Buckley). Sudden has some mysterious business to tend to that she doesn’t want her parents knowing about, so she asks Emma to stay at the Mercer home and pretend to be Sudden for a day or two. Things don’t work out as Sudden imagined, and soon it seems that everyone is playing the lying game.

Adrian Pasdar plays Alec Rybak, the biological father of both Emma and Sudden, who winds up back in their lives. Pasdar is a prolific actor who spent four years as flying politician Nathan Petrelli on NBC’s HEROES, who coincidentally was also the biological father of a remarkable teenager, the indestructible Claire, played by Hayden Panettiere, who was adopted by the Bennets.

Pasdar started his big screen career in TOP GUN and had leads in legendary film NEAR DARK, as well as in the series PROFIT and MYSTERIOUS WAYS. He voiced Tony Stark/Iron Man for last year’s animated IRON MAN and is repeating the superhero role for the new animated ULTIMATE SPIDER-MAN. He also toplines the Syfy premiere movie THE TERROR BENEATH, which premieres this Saturday.

ASSIGNMENT X: How is it working for ABC Family?

ADRIAN PASDAR: Well, I have two kids and it’s nice to be a part of some entertainment that is closer in reach to them in terms of what their interest levels are. [Pasdar’s sons are] ten and seven, but this is something that appeals to that younger [audience] – it’s pre-high school, they like the girls, and it’s a chance for us to cross-pollinate. I’ve been playing FBI agents and lawyers and presidents and senators, but it’s nice to play somebody who can – I can’t tell you [exactly what the character will do], but as the show goes on, he becomes much more interwoven in the teenagers’ lives, and it’s nice to see how those decisions you make as an adult work in tandem with the lessons you’re trying to teach your children. You act as you wish them to act. “Do as I do, not as I say” [The LYING GAME parents] are not cartoons. We’re not shot from the knee down, like Charlie Brown parents. There’s a lot of parental involvement here, and one of the great things is, we’re integral to the decisions [the teenaged protagonists] make in their lives, for good and for bad, and I think the show has the potential to explore some pretty cool things. 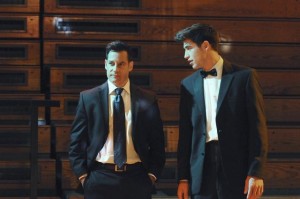 AX: What is your character like on LYING GAME? Is he very devoted to his job and this is something he has to pull himself out of work from, or is he very involved with lives of the main characters?

PASDAR: This is much more on a personal level than a professional one. We don’t spend a lot of time with me in a courtroom or anything like that. This is all about my relationship to my goddaughter Sudden and my daughter and my son. I can’t tip my hat any further, but it does get a whole lot more complicated.

AX: This is your second father of a given-up-for-adoption daughter. In this case, two daughters.

PASDAR: There are parallels that could be drawn between those [LYING GAME and HEROES]. I don’t have a pistol like Hayden Panettiere on my hands, though. This is a little bit different. Hayden Panettiere in HEROES, she was the oldest sixteen-year-old I’ve ever worked with [laughs]. I texted Hayden the other day.

AX: Do you have any feelings about the way HEROES ended? Or were you just exasperated by the time it ended?

AX: What were the feelings? Besides exasperation?

PASDAR: I can’t really get into it. It wouldn’t be fair to all the parties involved, but it was sad to see it end. I think we were tripped, like we fell over the finish line. We didn’t blaze it and that’s always a little bit of a disappointment. Every show gets canceled. You have to remember that. No matter how good it is. 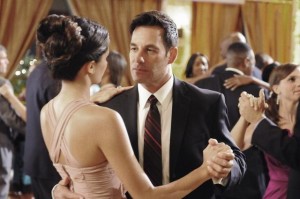 AX: Your LYING GAME colleague Helen Slater played Supergirl once upon a time. Have you compared flying stories?

AX: Are you looking forward to or with dread towards scenes where you’re dealing with the twins at the same time, because it’s green screen?

PASDAR: With the technology that we have today, some of the funnest stuff is being able to do the technical stuff. I’ve done loads of [green screen], and I’m usually hanging sixty feet above the ground on a little cable. This would be a whole much easier adventure for me. It’s not as special effects-heavy [as HEROES], and it’s a lot more teen angst-heavy.

AX: Did you read any of the books THE LYING GAME is based on?

PASDAR: Yeah, I read the first one. We have such a divergence that it was – and I have so much to read that reading that wouldn’t have helped what we’re doing. Chuck kind of intimated it, but we’re really exploding a few characters and diminishing other ones, and it’s a little bit different. It’s not my kind of literature.

AX: How is it working with a lot of fairly young cast members?

PASDAR: What are they calling them, Millennials? Is that really a word?  It’s interesting. To be honest with you, it’s one of the first times I’m coming into it seeing the bright-eyed, bushy-tailed kind of eager anticipation. I was just like that when I was that age. And that’s what gets you through your twenties. I think you need that blind energy in order to get through working as an actor in your twenties sometimes. But it’s great, because I actually get to sit back in my chair a little bit.

AX: Were you bright-eyed and bushy-tailed when you did PROFIT?

PASDAR: Yeah, probably, but it’s nice to be able to sit back and watch with a little bit of a keener eye how the day transpires. I was telling one of the folks here I had some great advice from Walter Brennan before he passed away. I asked him, I said, “Mr. Brennan, as a young actor coming up, I certainly admire your work. Is there any advice you can give me?” And he looked at me and he went [does Walter Brennan impression], “Sit down as often as you can!” [laughs] And that’s it, that’s all you need to know.

AX: There was some talk when you did the two-parter as FBI Special Agent Fallon on CASTLE that it might be some sort of set-up for a spin-off. Is there any truth to that?

PASDAR: Well, yeah. There had been talk about developing a show called FALLON. So many things have to come together.  [The CASTLE episodes were] at the end of the pilot season, the end of their shooting season, so everybody was burned out. It was not the right time – too late for a backdoor pilot, but yeah, that’s something I would completely [endorse].

AX: Do you have a deal at ABC?

PASDAR: No, I don’t. I’ve avoided having to make one of those and it’s been great. I haven’t lost any friends over it. I may have lost a show or two somewhere along the way, but it gives you the freedom and I just don’t want to lock myself into anything. It’s been really great. All the networks have been good. I think I’ve bounced around all of them fairly successfully.  I thought when I got involved [with LYING GAME], it was [for] nine episodes, it was good, it was [filming] in Texas, I could bring my kids to visit [Pasdar’s] in-laws and I really wanted to test the waters and see how this kind of arena would fit for me, working with these kids. It’s good. I hope that it goes on for me past ten [episodes]. I’ve only signed on for ten, but the way that the stories are falling out, they’d have to kill me for it to make sense [that the character wasn’t involved any more].

AX: What’s going on with ATLANTA, the music that you and Marcus Hummon wrote that was staged at the Geffen Playhouse in Los Angeles a few years ago?

PASDAR: We still have plans – we had an offer to do it in the West End, in London. We haven’t been able to pull it together because of my schedule and Marcus’, but that’s where I’d like to do it next, in London.

AX: Do you have other projects coming up?

PASDAR: Yeah, GARDEN OF EVIL is a Syfy show that filmed up in Vancouver. It’s so special effects-heavy, it’s taking them forever to get finished. It must be [airing later] this year. And the other one I did was CHASING LEPRECHAUNS. I did it in Dublin at Christmas. It’s amazing – it’s Saint Patrick’s Day. Amy Huberman – did you ever read that book, HELLO HEARTACHE? She’s an Irish author, she’s in it. I [play] an American fixer. I come to secure the land rights for a copper-smelting plant, which happened to be on the property where a bunch of leprechauns might live. It’s a romantic comedy. It’s very funny.

AX: Do you have anything else you’d like to say about LYING GAME?