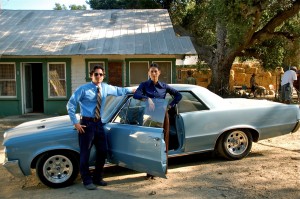 In the new hit transmedia web series RCVR that airs online on Machinima, Daniel Bonjour plays SIGMA agent Luke Weber – a charismatic man who has the uncanny ability to convince those that have seen or experienced UFO phenomenon  that it’s not what they actually saw.

The six-part series (Episode 4 debuts Wednesday on Machinima), directed and created by David Van Eyssen is set in 1973 and follows Weber as he investigates a UFO incident on a rural Arkansas farm. As he gets closer to the truth, he starts to realize he may play an even bigger role in this incident then he realizes.

For Bonjour, getting the chance to play such an important role in this ambitious series was exciting. He’s made a mark in independent film including a role in the 2008 cult horror film MIDNIGHT MOVIE, but the exposure the series has given him has elevated his profile in the weeks since RCVR made its debut.

In this exclusive interview with ASSIGNMENT X, Bonjour talks about Weber, his feelings about UFO phenomenon and what an exciting ride this experience has been for him.

ASSIGNMENT X: How much were you interested in UFO phenomenon before you took on the role?

DANIEL BONJOUR: I wasn’t an X-FILES junkie or anything like that, but I watched it. I was always one of those believers, even when I first talked with David. You have to be naïve to think that nothing else is out there. I was always a believer in that. I don’t think I ever geeked out and was into every show. David threw me his pitch of his story. It wasn’t geeking out with really crazy stuff like FRINGE does and other shows. It was a very basic of “what if” and if that’s the case, how involved are they? It’s that simple.

AX: Did you do research into the 1970s time period?

BONJOUR: It was research into the mindset back then. The fact that people were much more gullible and able to believe what was forced down their throat. There was much more propaganda and if you believed anything than what the government was feeding, you were considered a hippie or totally out there. I think that was the idea I latched onto it, that anybody is susceptible in their beliefs and that’s where Luke comes in. As far as the UFO side of it, I didn’t really get that much into the technology of what was coming out then. David in the first rehearsals gave me the background about that time period and what was happening technology-wise. I was more concerned with his mentality and how they coped with life back then.

AX: There’s an interesting tact between a cold FBI  agent versus what Luke is doing as a SIGMA operative – there’s more charisma involved. It’s word manipulation and influence, as opposed to intimidation.

BONJOUR: The way that David and I spoke about it, the way that Luke got into it, the background is, it’s the CIA – that’s where it hails from, but nobody applies for this job and in that sense, it’s like the Men in Black. He was the guy who thought outside the box and approached everything from a completely different angle. You can’t train for this. That was Luke. He grew up in the military and he was thrown into the situation with [Receiver] Helen Pinkus and he was the only one who could speak to her. He developed this position of the modern day charmer that could go around and talk to people and make them believe what he wanted. He was a regular guy trying to level these people and they totally bought into it. He is the kind of charismatic guy that SIGMA needs. They’re this intense evil government operation trying to unhinge the world and he comes off as a regular joe. 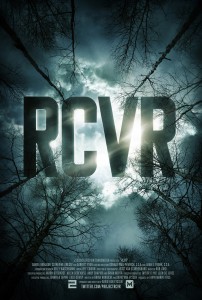 AX: Your characters gets banged up a lot during the series – did you do many of your own stunts?

BONJOUR: I think the third day, we were in this studio and they said “we have this stunt double, anything you’re not comfortable enough with doing, let us know.” I thought, “No, this is going to be great.” Little did I know I was going to thrown around ceilings and dropped down on things. The stunt guys did SPIDER-MAN and THOR. They were extremely professional and very, very considerate. At one point they dropped me on the TV and I took a couple of paintings down with me. I had a stunt guy come in on one of the takes and he was totally fine. They also turned the car upside down – and one of the doors came across and knocked me in the head. That’s how I got banged up – now I can say I did my own stunts and I feel pretty cool about it.

AX: I think the other aspect of RCVR that’s interesting – there’s a whole bunch of back story involved. It’s not “here’s under-developed characters.” There’s a rich history for what’s going on here – some TV shows, the story is discovered over 24 episodes or 5 or more seasons. Here, the relationships have been cemented – where the characters have been and where they’re heading.

BONJOUR: After I auditioned, David said I thought I was more concerned with the character than what I was seeing with the technology and mumbo jumbo. That was secondary to me. I come from more of a film background. TV, people are more apt to getting the story and getting the point across as quickly as possible. I’m not as good at that. I always want to know more about character. We still learned a lot of stuff while we were shooting about the character. That was always the first question. “What was the story point here?” That was just assumed it would come across. David wanted to show these were real people. No matter how insane the scenario, there is still a real person behind it. Luke Weber is that. He comes across crazy circumstances. Even though he is dragged across the ceiling, he’s a guy who feels the need to drink himself to sleep. To me, that’s much more interesting than what’s going on. It’s what people can relate to. They can relate to being depressed or having issues with their job or girlfriend. David was thankfully on the same page. We got to develop a strong, real character. 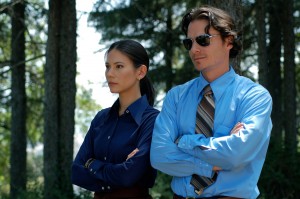 AX: Did you have a hesitation when you heard this was a “web series?”

BONJOUR: Initially when I heard it was a web series, a lot of things had to fall into place. I saw what David was doing – I was a huge fan of those BMW films he did. If anything, the fact that it was a web series, it gave us the freedom to not follow the TV series formula that sometimes can hurt a show, because it gets so formulaic, you don’t get to explore as much as you would like because it’s the web. This idea and concept that we filmed – it could be a TV show, a movie or web series. It was just good. And even though it was going out to the internet, there is no formula so we were able to film what we wanted and be as creative as we wanted it to be. And the comments are “it should be a TV show or movie,” I don’t think they know how to place it, because there’s nothing like it.

AX: And the audience responded quickly – the first episode is over 1 million views and it’s only been a couple of weeks since it launched.

BONJOUR: Luckily Machinima has a huge fanbase to begin with and they have been great about spreading the word. And all over the world within a week people have seen something we shot two months ago, whereas an independent film takes so long, because everyone is doing it themselves and it’s a year or two before anyone could see it.

AX: Are you looking forward to doing more RCVR.