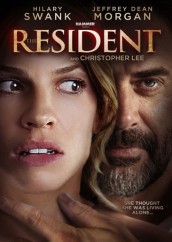 Hammer Films is back in business, and THE RESIDENT is true to that venerable studio’s old form, even including a supporting turn from that company’s biggest star, Christopher Lee. These are probably good reasons to see THE RESIDENT, which hews a little too closely to the old days in style. What was deemed terrifying in the ‘50s and ‘60s is now a bit tame, and what was accepted as psychological insight back in the day currently reads as basic information. None of this stops star Hilary Swank – yes, the two-time Oscar winner, who also serves here as one of the film’s executive producers – from giving it her considerable all.

Swank plays Dr. Juliet Devereaux, a Manhattan trauma surgeon who is in immediate need of a new place to live after she walks out on her unfaithful husband (Lee Pace). She finds what seems like the rental deal of the century in a gigantic multi-room apartment that’s being fixed up by friendly, handsome building owner Max (Jeffrey Dean Morgan), whose grandfather August (Lee) lives down the hall. What Juliet doesn’t know is that the apartment’s accessories include a stalker who can get in at will.

For awhile, writers Antti Jokinen, who also directed, & Robert Orr keep us guessing as to what’s going on, but it’s hard to maintain ambiguity when the filmmakers are also trying to do a character study with their figure of menace. Unfortunately, there appears to be some indecision as to whether they want the antagonist to be pitiably nuanced or just scary, with results that are more icky than either revelatory or frightening. The last act of the film is essentially a chase that doesn’t involve any strategy, so it feels like one note is being held for a long time.

Swank is a terrific actress and perfectly credible here as a woman who is taking what in other circumstances would be all the right steps to go forward with her life. Morgan, who also played a love interest for Swank in P.S. I LOVE YOU, does well with the demands of his role. Lee Pace (PUSHING DAISIES) is likewise good as Juliet’s ex and Lee fans get to hear him do a credible American accent. J. Dennis Washington’s production design is impressive.

As stalker thrillers go, THE RESIDENT has a great cast going for it, plus the fact that the heroine doesn’t do anything really stupid (a plot element that is, alas, often a stable of the genre). It’s unexceptional, but as these things go, it’s on the better side of average.