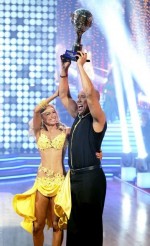 Season 12 concludes with Kirstie Alley as the surprising runner-up

It’s all over but the shouting! Hines Ward and Kym Johnson are the champions of DANCING WITH THE STARS – Season 12! It was no big surprise that Ward won. He had a huge fan base and the judges loved him. What was surprising is that Kirstie Alley edged out Chelsea Kane for second place even though Kane had five points on Alley.

DWTS: The Finale had a great opening to an incredibly long and suspenseful show. The season 12 pros started out doing their own routine while the eight eliminated stars entered at the end and joined in on the fun.

Awesome retros of season 12 intermixed with the past eliminated couples performing their favorite dances. All but Wendy Williams danced, no explanation was given but instead they did a terribly unfunny video segment about her appearing on her own show – THE WENDY WILLIAMS SHOW – with partner Tony Dovolani. At least it was nice to see the other seven contestants dance again, especially Ralph Macchio doing one of his best dances The Quickstep, but no crane, sorry folks.

Maksim Chmerkovskiy, Cheryl Burke, Lacey Schwimmer and Chelsie Hightower were picked as the pros the fans wanted to see dance together. They performed whilst The Go-Gos sang a very up “beat” number as the stretched out night continued until finally in the second half of the show we got to see the last performances of the three finalists – Chelsea Kane, Hines Ward and Kirstie Alley.

First up were Kane and partner Mark Ballas performing the Viennese Waltz. The judges loved it, of course. Len Goodman summed up her whole season on DWTS, saying she was a fantastic dancer no matter what happens tonight. Bruno Tonioli called her the enchantress. Carrie Ann Inaba told her the whole world knows her now. Kane ended up getting a perfect 30 for her dance, making her grand total of the last two nights a whopping 89 out of 90 and yet, it still wasn’t enough to win. Kane placed third in the competition.

Next up was Kirstie Alley doing the Cha Cha Cha with partner Chmerkovskiy. Alley showed how far she has come, earning her first perfect score from the judges. Tonioli told her she saved the best for last. Inaba stated how she loved her for who she truly is. Goodman flat out agreed with Tonioli saying it was her best dance of the whole season. Alley earned 84 out of 90 points. Her fans pulled her up a notch surpassing Kane and Alley placed second in the competition.

Season 12 champ Hines Ward and his partner Kym Johnson did a perfect Samba to end the season, giving them an impressive 89 out of 90 as their final judges’ scores. Goodman called Ward consistent throughout the competition and Inaba called him the MVP of the season. Tonioli just swooned over Ward, saying they all fell for him. Clearly, America did as well. Ward had many websites and many people pulling for him including a Black and Gold (Steelers colors) website that boosts 50,000 members.

In the end, there was no doubt Ward was going to take it all. With Hines Ward and Kym Johnson crowned season 12 champions. The season is officially over. Just four more months ‘til season 13. See you in September!

Click on any photo below to see the gallery of the winners.