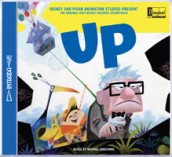 If Michael Giacchino brilliantly stepped into the shoes of John Barry and Henry Mancini to musically embody a family of superheroes and one rat’s exceptional taste buds, then 2009’s UP was the Disney animated extravaganza where Giacchino’s own, nostalgic voice rang loud and clear to the tune of an Oscar.

Where I’ll be in the crotchety, Carl-worthy minority of those who’d want to take a cane to the unabashed cuteness of what awaits an old grumpus and an antically annoying boy scout on top of the forbidden mesa they float to, there’s zero denying the tear-jerking brilliance of UP’s life vignette opening. And there’s positively no way to fend off how wonderful Giacchino’s score is from start to finish with a score that’s Disney’s most deserved take-home statuette in the scoring category for my book.

The Spirit of Adventure, and wondrous sentiment that Giacchino captures here are positively buoyant in this lovely, theme-propelled score. Like the best, old jazz Americana, Giacchino’s melodies brings one back to sun-tinged memories, and the giddiness of lost dreams regained, all with gossamer orchestrations that firmly link UP to the golden age of Disney scoring in BAMBI, PINNOCHIO and DUMBO, scores which shared the same sense of wide-eyed wonder and sentiment.

What’s more delightful is how Giacchino mixes this can-do spirit with the tropical percussion, and orchestral foreboding of a land of giant dodos and talking dogs- the themes just as malleable for cuteness as they are swashbuckling danger. But as opposed to the rugged adventurers that “lost continent” scores of this type had, Giacchino’s music is always aware that its heroes are far from the rugged types- just a crotchety widower and a pudgy scout trying to prove their self-worth. It’s a lovely mix of bittersweetness and excitement that makes Giacchno come across as much as a wizened composer with years of wanting to write the next big adventure score as he is the geeky kid out to impress with his merit badges. It’s the kind of enthusiasm that’s distinguished much of Giacchino’s best work, no more so than in UP.

Yet even after winning an Oscar, UP marked the beginning of the end for mainstream soundtrack release on CD. For if you weren’t lucky enough to pay for the physical promo, the only way to hear UP was through the listening medium of iTunes- an inferior choice given the sound quality of a silver disc, let alone the dinosaured vinyl records of Carl’s generation. But now thanks to a new release pact between Disney and Intrada, UP is at last available the way it should have been all along.

Better yet, UP’s booklet has been glorious designed to look like the Disney albums of yore, full of picture-book illustrations and winking retro descriptions that will make any jaded listener feel like a music-hungry kid again, ready to wear a groove into his record. One can only imagine the Disney treasures for Intrada to mine in this exciting team-up, which couldn’t have gotten a more apt title to start this exciting collaboration up with- let alone one that will hopefully rescue other worthy scores from an e-ether more menacing than any mesa’s foggy summit.