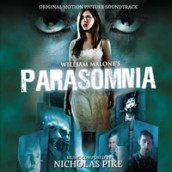 Nicholas Pike hears the stuff that nightmares are made of

Director William Malone gave the somnambulist thrills of THE CABINET OF DR. CALIGARI a slasher spin for his horror flick PARASOMNIA, his imagination especially inspired for its German expressionist dream sequences. But perhaps PARASOMNIA’s most bizarrely remarkable contribution is its surrealistic score by Nicholas Pike, who’s previously conjured musical nightmares for SLEEPWALKERS, THE PEOPLE UNDER THE STAIRS and LOVE OBJECT (let alone BUD THE CHUD). His own partnership with Malone has been no les fearfully fruitful with credits including FREDDY’S NIGHTMARES, TALES FROM THE CRYPT, MASTERS OF HORROR and FEARdotCOM– a score whose nerve-jangling creepiness stands as a piker when it comes to the truly outré madness unleashed here.

Where most scores going for this hallucinatory sound tend to dump themes and melody into the void, perhaps the best thing about Pike’s approach to PARASOMNIA is how well-constructed its puzzle box is at balancing traditional composition with utter strangeness. While tender theme speaks for the spirit of young love, it’s also corrupted by a maniac who can pull the couple into worlds where detuned flutes, heavy breathing, blasting organs, waltz rhythms and mechanical clanking effects hear bad dreams like steampunk music boxes. Giving them even more bad vibes is a blaring killer motiff that’s one of the more striking horror score effects since Christopher Young conjured Leviathan for HELLRAISER 2. Yet always balancing the most wildly experimental stuff, even as its detuned, wheezing tendrils bio-mechanically invade the music of Gustav Holst, is the emotional reality of a poignant piano, strings and a haunting chorus to paint a surprisingly poetic picture of good versus overwhelming evil.

With a hapless hero who’s a record store clerk, Malone is sure to use retro songs to comment on the increasingly gruesome action. Particularly clever is how the filmmaker also creates an ironic love theme with the Beatles / Beach Boys-like sound of The Bossmen, whose “You’re the Girl For Me” jumps from 2009 to a “1966” version with truly twisted effect.