Home » CD Review: THE HOUSE BY THE CEMETERY soundtrack 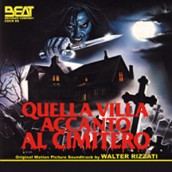 CD Review: THE HOUSE BY THE CEMETERY soundtrack

Where POLTERGEIST stands as a landmark in how mostly traditional instruments and orchestrations could be used to create an unearthly tone, rock-centric music certainly wasn’t a slouch at digging into those same fear centers, perhaps with even more chilling results. It’s likely no band did it better than Goblin, an Italian group that turned the progressive vibe pioneered by the likes of Pink Floyd and Zeppelin to far darker ends, using acid builds of electronics, strumming guitars and wailing voices to become escalating webs of fear, the big solo usually accompanying some unlucky woman’s evisceration in such classic scores as DEEP RED and SUSPIRIA.

The impact of Goblin’s work on these seminal Dario Argento films certainly wasn’t lost on fellow splatter auteur Lucio Fulci, or his composer Walter Rizzatti. Their teaming for QUELLA VILLA ACCANTO AL CIMITERO (aka THE HOUSE BY THE CEMETERY) certainly has the Goblin vibe in spades, as filtered through Rizzatti’s own talent. A prolific composer for such crazed, and diverse Italian exploitation fare like 1990: THE BRONX WARIORS, LUST FOR SEX and THUNDER WARRIOR 2, HOUSE would be Rizatti’s only, notable teaming with a maestro of visual gore, its story of a maniac surviving on body parts inspiring musician-turned-director Rob Zombie to create “Dr. Satan” for HOUSE OF 1000 CORPSES.

As for Rizatti’s own HOUSE, the composer’s work plays like a “best of” compilation of every musical device that had come to stand for splatter spaghetti. You can check off the funk piano beat (“Quella Villa”), a Baroque organ (“I Remember “Walt Monster End”) a wonderfully cheesy wash of old-school synths (“Blonk Monster”), discombobulated strumming (“Blonk Facia”) and even a tender piano (“Tema Bambino”). Rizzi’s affection for Goblin (particularly their score to DAWN OF THE DEAD– i.e. ZOMBI 2) comes through in the African beats and wordless chorus of “Voci Dal Terrore” while the classical feel that Keith Emerson created for Argento’s INFERNO finishes off HOUSE’s killer in “Blonk Monster End.”

While this music might spell hell for HOUSE’s residents, the sound on Beat’s new CD is seventh heaven for fans of Italo horror, and 70’s / 80’s style thrills in particular, the sound of which would be reflected through the work of John Carpenter and Fred Myrow’s classic soundtracks to HALLOWEEN and PHANTASM. Rather than just going for cool, if now technically dated flourishes, HOUSE still stands up for its tight thematic construction, its corridors filled with the kind of deliberate and unsettling melodies that many of today’s state-of-the-art composers can’t begin to get a handle on. Just consider this cleaned-up HOUSE your one-stop shop for the weirdly rocking sound of dubbed terror.

To purchase THE HOUSE BY THE CEMETERY – CLICK HERE