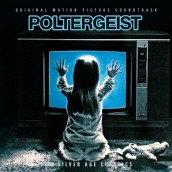 Certainly one of the loudest, and most exciting horror scores belongs inside the television set of the Freeling family, as installed by Jerry Goldsmith. Though a master of just about every movie genre, horror had provided a creatively malefic voice for Goldsmith. He’d marry Bartok-esque impressionism and old scratch violins for THE MEPHISTO WALTZ, blow on MAGIC’s unbalanced harmonicas and win his only Oscar for chanting THE OMEN’s black mass.

But the nature of the beast was certainly changing when Goldsmith took mainstream science fiction into its most visceral, and visual dimension with 1979’s ALIEN, for which he provided a lush, primal score. Leave it to Steven Spielberg to turn that kind of spookhouse space ride into a full-blown, haunted house rollercoaster with 1982’s POLTERGEIST, which turned horror into a special effects fiesta. Goldsmith would provide an equally thrilling cornucopia of his greatest genre hits for his first teaming with that film’s producer. However, Spielberg’s true role as POLTERGEIST’s de facto director was one of the worst-kept secrets in Hollywood, let alone for fans who saw Spielberg’s handprints all over the film’s suburban slickness, as opposed to the TEXAS CHAINSAW grue and grit of credited, and back-seated director Tobe Hooper.

Indeed, so ingrained is POLTERGEIST in our pop consciousness decades later that it’s hard to stand up and salute our national anthem without thinking “main theme from POLTERGEIST” in the back of our heads. While the soundtrack’s new, ultimate edition on Film Score Monthly does indeed include John Philip Sousa’s “The Star-Spangled Banner” (complete with television static), what stands equally strong in the Spielberg generation’s memory is the haunting, sing-song children’s voices of POLTERGEIST’s main theme Between this ironically dark lullabye and THE OMEN’s satanic Latin, no composer had a better ability to bend vocals to his demonic whims like Goldsmith.

As with the similarly malicious GREMLINS that he’d score for Spielberg’s Amblin productions the next year, POLTERGEIST’s music begins with deceptive, even joyful charm, with beautifully melodic strings capturing the warm, familial interplay that’s the key to Spielberg’s success- all before the curtain of suburban normalcy is ripped away to reveal something far more malicious in the planned community midst, or in this case the confused and angry corpses buried underneath the Freeling’s model home.

Yet for all of the pounding adventure-terror that POLTERGEIST ends up with for the spirits’ cathartic release, there’s something comforting, even holy in Goldsmith’s approach for a little girl lost, an aching tenderness that gives the score (and film) its true power. Gentle instruments like the piano and flute sound like they’re trying to find their way out of a menacing funhouse of evil clown ratchets, growling horns and the piercing, electronic hum that stands for the TV twilight zone Carole Anne has entered. It’s no surprise that POLTERGEIST owes a plot debt to that show’s episode “Little Girl Lost,” or that Goldsmith had composed the fiddle-filled soundtracks for such iconic ZONEs as “The Invaders” and “Nightmare at 40,000 Feet.” Here those swings between devilish and magical eeriness plays on a far grander scale for its battle between sacred and the profane. One striking example is when the ghastly dissonance of a man ripping his face off segues into a beautiful waltz for the undead descending down a staircase. “The Night Visitor”’s plaintive creepiness recalling Goldsmith’s approach to the psychology of his Oscar-nominated FREUD score (music that also ended up being tracked into ALIEN).

But if the luxury of expanding, and remixing the chills of POLTERGEIST from its last Rhino release has a real treasure here, than it’s the astounding sixteen-minute cue “Let’s Get Her / Rebirth,” beginning with Goldsmith’s hopeful description of the afterlife, Then with a sharply ominous warning of The Beast lurking within the Freeling’s closet, Goldsmith goes into a stunning rescue of Carole Anne with angelic female voices as an orchestra plays the colorful bursts of ectoplasm. It’s the revelatory sound of a cosmic quest that can also be heard in the majestic encounter that Goldsmith had with V’jer in STAR TREK- THE MOTION PICTURE. Except in POLTERGEIST, Goldsmith is reveling in the bridge between life, death, love and evil, extended musical storytelling that stands not only as a highlight in Goldsmith’s career, but as a stunning example in the power of film music to enrapture us while taking listeners to another dimension beyond our imagination.

Having done a bang-up job of restoring Goldsmith’s ALIEN for Intrada, album producer Mike Matessino teams with original POLTERGIEST music score supervisor Bruce Botnick to make this into a truly spectacular release that lets the spooks out of the closet with renewed sonic fury. Not only does FSM gather all of the POLTERGEIST tracks and alternates, but the double-CD also offers throws in Goldsmith’s score for THE PRIZE in the bargain. Though this 1963 Paul Newman film (centered around the Nobels no less) might seem like an odd duck in the company of R