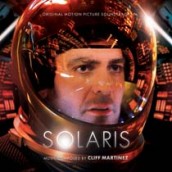 Ever since composer Cliff Martinez broke the sound barrier of “indie” scoring with the similarly eccentric Steven Soderbergh on SEX, LIES AND VIDEOTAPE, their collaborations on such films as KING OF THE HILL, KAFKA, TRAFFIC and the upcoming CONTAGION have resulted in near-hallucinatory atmospheres of melody, rhythms so fragile that they seemed in danger of breaking with a listen. That’s why there’s no better example of their hypnotic partnership than the crystalline vibe of Soderbergh’s 2002 remake of SOLARIS, a score wherein Martinez also brought in the larger sound of a 90-piece Hollywood orchestra, while using it in similarly offbeat ways.

If anything, Martinez and Soderbergh are the only two people who could have made the haunting minimalism of Andrei Tarkovsky and Eduard Artemyev’s original even stranger. But then, we can be thankful to Soderbergh (at least when he’s in “art” mode) for telling Martinez to defy the musical conventions of Hollywood, no more so than for what we’d normally expect in sci-fi scoring (even for a movie produced by James Cameron).

Martinez’s gorgeously minimal take on SOLARIS is about playing the unfathomable nature of space as opposed to hitting onscreen effects action, Delicately balancing the orchestra with the percussion of Baschet crystal and steel drums, SOLARIS alternates between moody passages and exotic rhythms. It’s a transfixing sound that gives listeners the same out-of-body feeling that the space station’s inhabitants must feel when confronting the ghosts of the past become transitory flesh, made palpable by the unfathomable living planet below them. Yet never once does Martinez try to create music that will let you figure it out. With tentative, ever-sustaining strings that draw to mind Kubrick’s use of Gyorgy Ligeti’s “Atmospheres” in 2001: A SPACE ODYSSEY, Martinez just might have conjured just film scoring’s ultimate trip here.

While it’s long been a favorite of soundtrack cognoscenti, as well as directors and music editors in the know, SOLARIS’ original release on the Trauma label has been nearly impossible to find for years. That will make the many who’ve been caught in Martinez’s cosmic spell welcome La La Land’s new release, with Julie Kirgo’s incisive liner notes including reflections by Martinez and Soderbergh on their unique musical alchemy, a collaboration who’s spellbinding sound has always seemed like it came from some other universe.