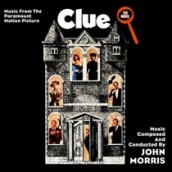 John Morris did it in the attic with the cult score

For all of the toy-to-movie adaptations ever made by Hollywood, 1985’s CLUE still stands as the only one done from a board game (sorry doubters, but JUMANJI was made up for that film). Director Jonathan Lynne’s staging of CLUE’s lethal antics as an all-star bedroom farce further propelled the picture to cult status. Now a phenomenon that’s grown to ROCKY HORROR stage show heights gets another wonderful knife in the attic with the release of John Morris’ wonderfully antic underscore, a Baroque-style dark and stormy night of screwball music.

As the prime musical suspect behind such Mel Brooks satires as BLAZING SADDLES and YOUNG FRANKENSTEIN, John Morris was particularly well-suited to join the all-star rogues gallery of this Agatha Christie-style spoof. Indeed, murder most foul has never sounded peppier, almost as if this movie-cum-stage play was a Broadway musical waiting to happen. Morris darts about Lynne’s lightning-fast dialogue with ironic, overly dramatic bolts of suspense, even going into the rhythm of a saber dance for the butler’s breathless round-up of the film’s knowingly convoluted plot.

Buoyed by a memorable theme, CLUE is awash in droll melody, an elegance carried by a diabolically plush orchestra that also pays hip homage to the gothic mysteries of yore with ’80’s-style synth harpsichords and Theremin-like shrieks as more bodies bite the dust.

La La Land has done an exceptional job of compiling CLUE’s dozens of bits of musical business into a smooth, pleasingly cohesive listen, complete with numerous alternates of its main theme and a new liner note interview with Jonathan Lynne, who expounds on the CLUE cult phenomena will thankfully never say die.