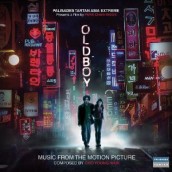 Korean cinema, and scoring got hammered into the map with Chanwook Park’s twisted tale of a revenge years in the offing, but what also distinguished OLDBOY was how composer Cho Young-Wuk took a truly offbeat road to musical revenge by using tangos and waltzes for the film’s dance of psychosexual destruction.

While a score of this type literally couldn’t get classier with its sonorous violins and piano, Wuk also employed near-mournful suspense, electronica and stormy combos of strings and synths to deliver the genre goods without letting its characters off the hook for their depravity. With its impressively strong use of themes and melody,OLDBOY’s music more than confirms its place in both the annals of world cinema.

First available as a Korean import, and then as a download, Milan now gives OLDBOY’s soundtrack its first, limited English-realm release on a hard copy CD, which makes it all the better to knock some good-old fashioned jewelcase sense into your  hallway enemies’ heads with.